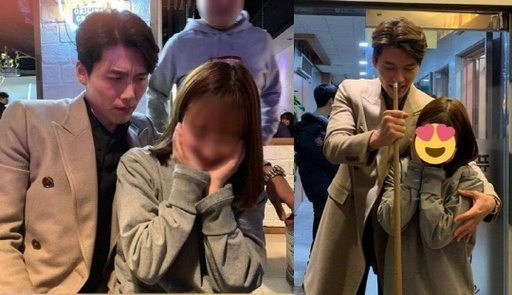 Pictures of Hyun Bin at a closing event for "Memories of the Alhambra" have gone viral. The previously unseen photos depict Hyun Bin making funny faces with an unknown female staff member.

The face of the staffperson has been censored for her privacy, as she is not a celebrity. It is unknown whether she requested the selfies herself or if other persons suggested them.

The apparent redness in their cheeks appears to suggest that both of them were somewhat inebriated. Hyun Bin appears to be engaging in self-parody. Staff of "Memories of the Alhambra" likely have a decent idea of the gulf between Hyun Bin's image and his actual personality, even if they did not often interact with him socially.