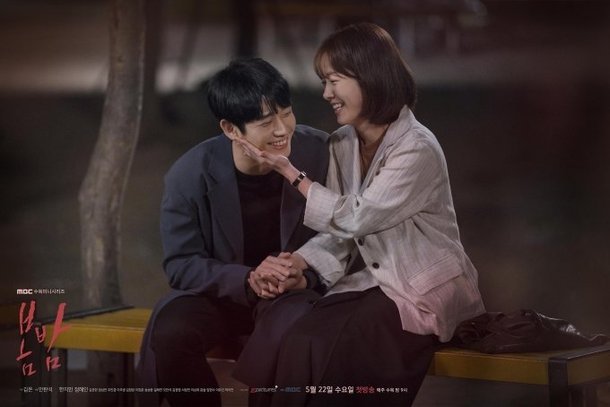 Since the conception of "One Spring Night" as a project it has been compared to "Pretty Sister Who Buys Me Food" as a possible spiritual successor project. After all, both dramas share the same lead actor, Jung Hae-in, and the same director, Ahn Pan-seok. Both dramas have similar themes of a happy present day compared to an ambivalent romantic future - "One Spring Night" is only really missing Son Ye-jin to top it all off.

Now that the drama has actually started, immediate differences between the two dramas are much more obviously apparent. The lead characters, instead of being adrift in life, are shown to have actual commitments and plans. Jung Hae-in's character, Ji-ho, has a son, and Han Ji-min's character is focused on marriage.

Some of the themes and performances between the two dramas are similar, as to be expected. More cast and crew are shared between the two productions than just the lead actor and director. But compared to "Pretty Sister Who Buys Me Food", "One Spring Night" appears to be focusing more on how romantic relationships are shaped by change, with stronger social commentary on what marriage is, why some people want it, and whether that's important.

"[HanCinema's News] "One Spring Night" Compared to "Pretty Sister Who Buys Me Food""
by HanCinema is licensed under a Creative Commons Attribution-Share Alike 3.0 Unported License.