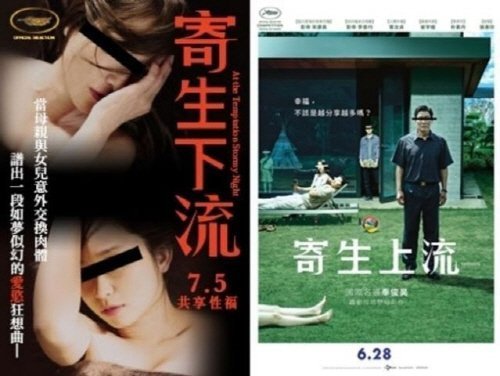 Since its release on June 28th "Parasite" has done reasonably well in the Taiwanese market. It has made thirty five million Taiwanese dollars at the local box office and placed third in the overall box office rankings for both weeks. However, confusion began on July 5th with the release of the Japanese film 'Parasitic Wave'.

'Parasitic Wave' is the story of a mother and daughter who switch bodies, to which the mother responds by indulging her sexual passions. The marketing for the Japanese film deliberately plays up the superficial similarity to "Parasite" with a parody poster that similarly obscures the eyes of the main performers.

It is unclear how many theatergoers were actually confused by the similarity. Social media posts discussing the two movies have had a humorous tone, giving the impression that the anecdotes of entering into the wrong theater may be intended as a joke and not a representation of an actual mistake.