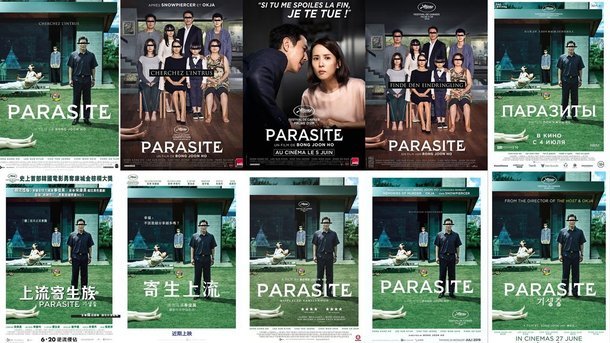 Following its Palme d'Or victory at the Cannes Film Festival "Parasite" has had successful mainstream releases in a large number of territories. The film has nearly hit ten million viewers since its May 30th release in South Korea and has also broken records for Korean films released in Vietnam, France, Indonesia, and New Zealand. "Parasite" is the best performing Palme d'Or winner to ever appear in Taiwan. It's the second highest performing Korean film to appear in the Russian market.

The way the film has been marketed across countries has been fairly uniform. The original South Korean poster is typically used, and the details of the plot are left ambiguous. The Palme d'Or win, and to a lesser extent the Sydney Film Festival win, are used as an assurance of quality. But more than pre-release marketing all releases of "Parasite" have been relying more on word-of-mouth recommendations from those who have already seen the movie.

The poster for the French, German, and Swiss releases has a slightly different theme. All the characters are lined up with black bars over their eyes, with a caption stating 'find the intruder'. An alternate French poster which is a still image of Lee Sun-kyun whispering into Cho Yeo-jeong's ear is technically a spoiler that has received light criticism on social media.

The Hong Kong and Macao releases, which have titled the movie 'High Society Parasitic Family' also has the statement 'poverty might be a dead end' on its poster. In this case too inspiring curiousity with vagaries is the main point of order. Other offbeat phrases include 'misplaced familyhood' in Australian and Malaysian promotions as well as 'location in attack' for the Hungarian marketing campaign.