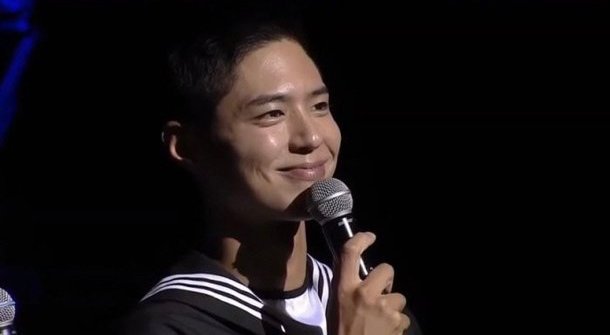 At a recent cultural event for the South Korean navy Park Bo-gum made some impromptu remarks about "Record of Youth" which finished on October 27th. The navy cultural event, which involved a musical performance, took place on that same night, at an event which Park Bo-gum co-hosted with Park Se-young. The event was broadcast live on YouTube, and can be watched here although English subtitles are not available.

Park Bo-gum's remarks were not particularly elaborate. He simply acknowledged that "Record of Youth" had finished airing that same night, and encouraged his fans to watch his upcoming movie "SEOBOK" which is expected to be released before the end of the year. The problem is, that for Park Bo-gum to make such statements is against military regulation. While undergoing mandatory military service soldiers are not allowed to promote themselves in regards to other work.

The irony, of course, is that Park Bo-gum is not just any soldier. He was recruited to emcee this particular naval event precisely because of his known reputation and fanbase. Park Bo-gum has also been actively promoting himself in other ways that technically run afoul of military rules. At a press conference for "SEOBOK", a prerecorded message appeared from Park Bo-gum, apologizing that he was on military service and thus unavailable to promote the movie in person.

While criticism of Park Bo-gum's behavior has been pointed, the navy itself is relatively unbothered by his statements. A naval representative has said that Park Bo-gum's comments about his career were intended to help unwind the audience and create a pleasant viewing environment for the concert. The naval representative also noted that Park Bo-gum volunteered for a naval event back in May, and applied for a marketing position in June months before his deployment.

"[HanCinema's News] Park Bo-gum in Trouble for Remarks at Military Concert"
by HanCinema is licensed under a Creative Commons Attribution-Share Alike 3.0 Unported License.