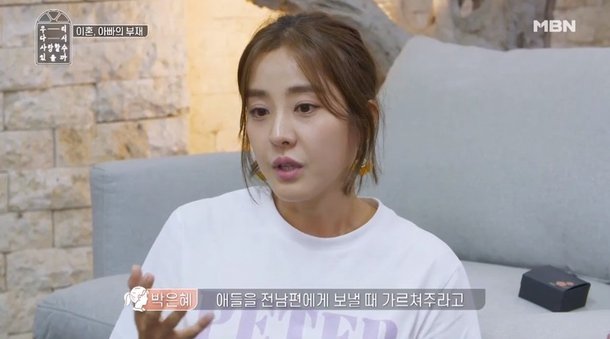 On the November 14th broadcast of the variety show 'Can We Love Again' Park Eun-hye discussed more of her personal concerns following her divorce, particularly regarding her twin sons. She discussed taking them to baseball lessons with her then-husband, and how he played catch ball with them by himself to teach them the basics, which the other children knew, but they did not.

Park Eun-hye was upset by this, and later on the baseball teacher called to say that he could teach them. As she explains it, her reason for wanting them to do baseball was to get them do exercise, while her husband had a more competitive attitude. These personality differences in raising the children appear to have been a major factor in the divorce.

Park Eun-hye also discussed how her feelings about having twins have changed over time. Even if one of them complains, she has to put both of them in piano lessons, because of the difficulty of scheduling both of them at once. In this way she explained the troubles she has had caring for them alone. In spite of this Park Eun-hye has still been working to make sure her ex-husband also attends school events so that they can both be all that they can be as parents.