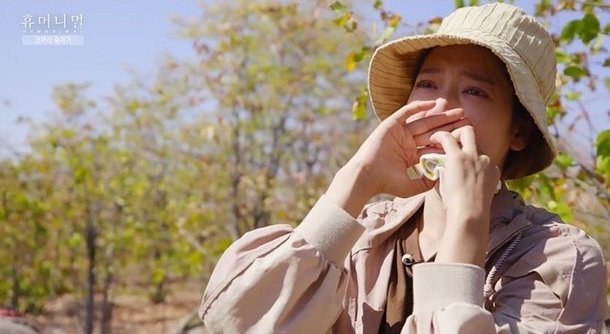 Park Shin-hye has reentered South Korea's cultural landscape in surprising fashion this year, as the popular actress is currently appearing in, of all places, an MBC television documentary. 'Humanimals', a nature documentary which deals with humans in nature, also counts Kim Woo-bin among the credited cast, as he does the documentary's narration in his first work since being diagnosed with nasopharyngeal cancer.

Part one of 'Humanimals' takes place in Botswana, home to forty percent of the world's elephants. Due to ivory poaching, ivory originating from elephant tusks, the elephant population has declined thirty percent over the last seven years. Nevertheless, the Botswana government legalized elephant hunting last September.

In addition to footage of elephants, alive, dead, and dying, the program features numerous conversations between Park Shin-hye and elephant expert Mike Chase. In these conversations with Mike Chase they discuss the often brutal ways elephants are killed. In one disturbing example, an elephant is shot with a gun, skinned alive, and then poisoned from the inside. Park Shin-hye cries on camera in response to these stories.

'Humanimals' will pick up again on January 9th, where Yoo Hae-jin will meet trophy hunters who are expected to explain why what they do is actually in the best interests of preservation. Ryu Seung-ryong will also feature in a later episode of the program.