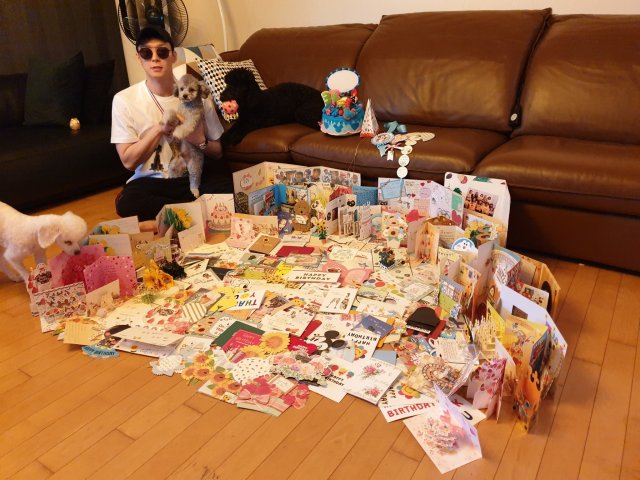 On July 3rd Park Yoo-chun's brother, Park Yoo-hwan, posted an English message on Twitter. The tweet reads, "Hi 바보 [fool]s! Today... I will not be streaming, going to spend time with hyung! Catch up with everything... Sorry! Will be streaming tomorrow though, I promise! Thank you again everyone".

Along with the announcement Park Yoo-hwan also posted a picture of his brother wearing sunglasses and holding a pet dog and looking at the camera. He is flanked by a large number of birthday cards. There's no way of dating the picture, but Park Yoo-chun did have his thirty-third birthday in prison. Additionally, about a hundred fans were present for his release on July 2nd.

Park Yoo-chun recently received a suspended two year sentence from Suwon District Court in connection with drug related offenses. He has been treated with relative leniency because court officials believe he is sincerely remorseful. Park Yoo-chun promised to devote himself to charitable work upon his release and apologized for his actions.

"[HanCinema's News] Park Yoo-chun to Spend Time With his Younger Brother"
by HanCinema is licensed under a Creative Commons Attribution-Share Alike 3.0 Unported License.