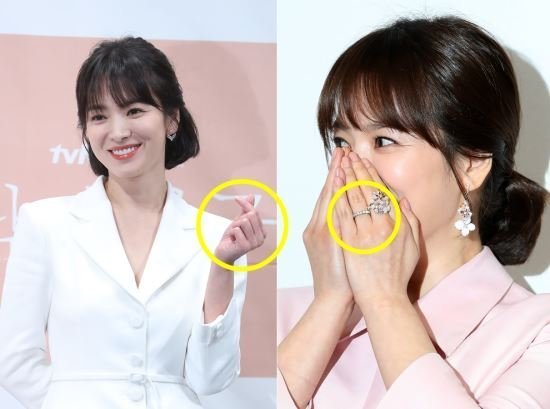 Following the news of Song Hye-kyo's divorce from Song Joong-ki, past photos of her wedding ring, or lack thereof, have been given new attention. Song Hye-kyo's wedding ring was noted to be absent during a November promotional event for "Encounter" as well as during a cosmetics launching event in March.

A representative from the relative fashion company contextualized this on June 27th, stating that Song Hye-kyo had lost weight compared to the previous year and that her clothes as well did not fit properly. They are claiming that the ring had to be resized earlier this year during the time she made the promotional appearance. Further statements cast doubt on her general health at the time, stating that Song Hye-kyo had a dark expression and looked as though she had been crying.

The same day a lawyer for Song Joong-ki stated that both sides of the soon to be divorced couple considered that mistakes had been made mutually in the relationship and that they were not harboring ill will. He asked for continue patience regarding their difficult situation.