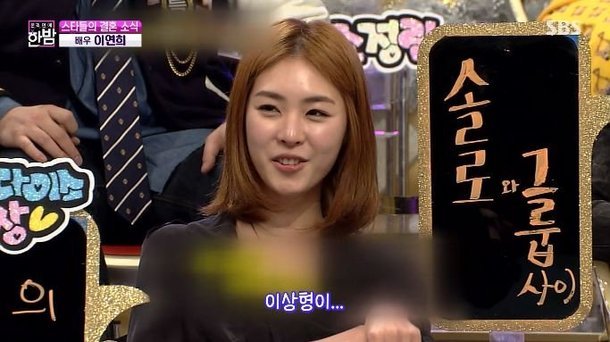 On the most recent episode of the SBS entertainment news program 'E-news Exclusive' the program revealed old footage of Lee Yeon-hee from variety shows that have shed some light on her sudden marriage announcement. Though Lee Yeon-hee is getting married on June 2nd she had not prior to this announcement even been known to have a serious boyfriend.

Part of what made this story so surprising is that Lee Yeon-hee has been known to be entirely scandal-free for her entire career since her debut as a child star in 2001. Though a surprise pregnancy would be a common rumor in this kind of situation Lee Yeon-hee's image is so clean that even that obvious idea hasn't gained much traction.

Another clip was also shown from a different program called 'Stalking' where she expressed a fondness for a man whose veins could be seen on his forearms. Then, on 'Let's Eat Dinner Together' she cited an ability to communicate as being critical and having good taste. This all provides some insight into her thought process, even as her groom, a non-celebrity, remains shrouded in mystery.