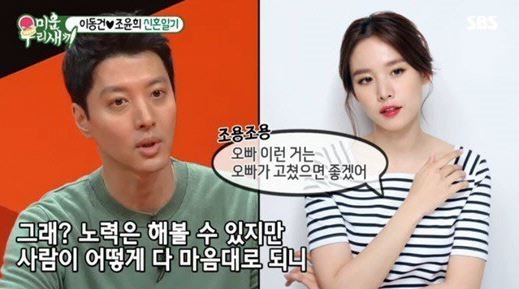 With the surprise that has followed his abrupt divorce, many have been left wondering what went wrong with Lee Dong-gun's marriage to Jo Yoon-hee. One possible explanation has come through an old episode of the variety show 'My Little Old Boy', wherein Lee Dong-gun discussed some of the events that led to his marriage.

In the program, Lee Dong-gun discussed working with Jo Yoon-hee for a full year on the fifty episode drama "The Gentlemen of Wolgyesu Tailor Shop". In the drama they play characters who are romantically attached, eventually to the point of getting married and having a child together. According to Lee Dong-gun, at the end of filming he was wondering if it would really be all right for them to not meet again.

Other decidedly less romantic thoughts include the frank admittance on Lee Dong-gun's part that he did not consider himself to be the kind of man to get married. Rather, he thought it was a way to keep Jo Yoon-hee from getting away from him. Other comments to the effect of their age, and a desire to have children quickly, suggest an accelerated timetable. Lee Dong-gun also conceded he could not bring himself to propose outside of the babymaking timetable.

The sequence of events is somewhat at odds with the dates of their courtship. The intent to marry was announced in May of 2017, with the actual marriage taking place in September, and the birth of their daughter taking place in December. In the end, personality differences were cited as the official reasons for their divorce, which was announced on May 28th.