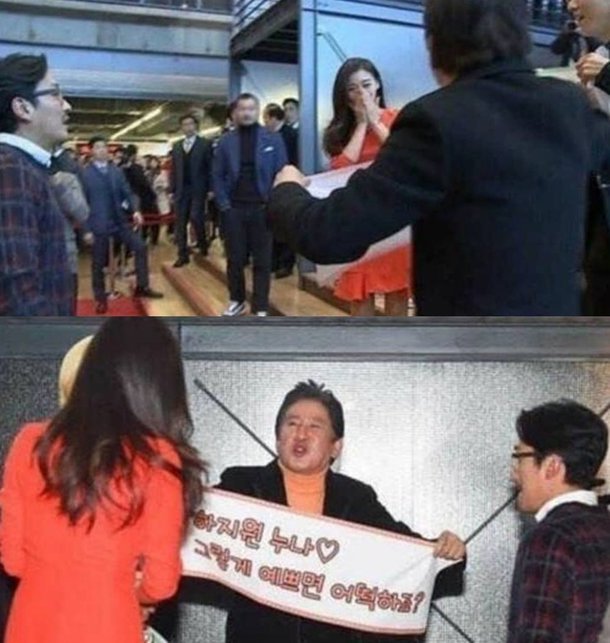 On January 23rd some old photos appeared at a Ha Ji-won fan cafe, spreading out to the rest of the Internet. In the photos, Ha Jung-woo and Ha Ji-won can be seen at some sort of event.

Ha Ji-won is covering her mouth in shock while Ha Jung-woo looks on in the first photo at a person who has unfurled a banner. The identity of the person and the text of the banner appears in the second photo.

It turns out that the mysterious person was none other than Kim Yong-gun, Ha Jung-woo's father, with a comical expression on his face. The banner refers to Ha Ji-won as an older sister and asks how she can be so pretty. Ha Jung-woo can be seen pursing his lips in obvious irritation. It is unclear whether Kim Yong-gun was acting purely as a fan of Ha Ji-won or if he was simply attempting to embarrass his son as fathers are known to do.

In any case, Kim Yong-gun's identity explains how he was able to approach the celebrities so easily, as he would have been known to security. Though the photo is not specifically dated, it appears to relate to press event for "Chronicle of a Blood Merchant", in which Ha Jung-woo and Ha Ji-won appeared as leading co-stars.