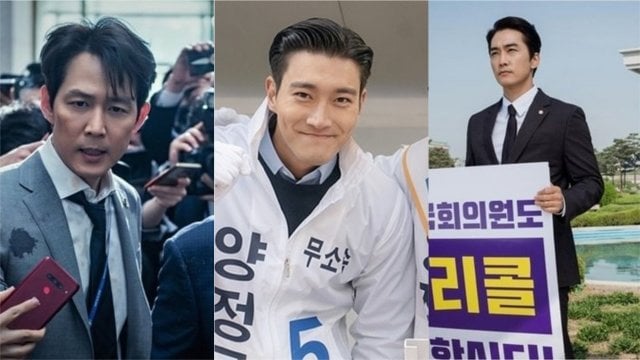 Politically themed dramas have long been seen as risky in the South Korean market. Politicians are not popular in the country and going into any degree of speficity about the beliefs of fictional characters is a sure fire way to anger those who identify against such beliefs. Recent political dramas, however, have been bolder about tackling real-life issues and have done reasonably well as a result.

This trend is actually not so new as it seems. Ten years ago dramas such as "City Hall", "Daemul - Big Thing" and "President" all made a name for themselves as dramas with similar theming. "City Hall" and "Daemul - Big Thing" in particular were major hits with excellent ratings. "Daemul - Big Thing" even had a more ambitious concept than the latest round of political dramas by centering around a woman civil rights lawyer who prevails against the odds to become the South Korean president.

By the Park Geun-hye era such progressive minded ideas were effectively blacklisted, even as Park Geun-hye herself tried to portray herself as a relative outsider who would clean up corruption in the government. In 2015 "Assembly", in an attempt to be perfectly agreeable, failed to make much of an impact ratings wise or culture wise.

But with the success of the candlelight rallies civic engagement as a popular fiction idea has taken hold. "My Fellow Citizens", "Chief of Staff", "Designated Survivor: 60 Days", and "The Great Show" have all been greenlighted and produced in short order. "Chief of Staff" was even so bold enough as to preemptively film a second season.

Unlike their predecessors,these newer drama take an optimistic view of government. Their characters embody different parts of political life. "My Fellow Citizens" follows a career government employee, while "Chief of Staff" deals with a man who got involved in politics long ago to do good in the world. The lead character in "Designated Survivor: 60 Days" is a scientifically minded specialist, while "The Great Show" focuses on the pageantry of relection campaigns.

It is from this standpoint that current batch of political dramas also deals more strictly in direct policy instead of being deliberately vague about what politicians do or what ideals they stand for. In this way the drama reflect greater civic engagement. However, how effectively they can reflect real life is always at issue. While these dramas were produced in a more optimistic environment, that can easily change at any time.

"[HanCinema's News] Political Dramas Push Back Against Negative Perception of Politicians"
by HanCinema is licensed under a Creative Commons Attribution-Share Alike 3.0 Unported License.