[HanCinema's News] Press Conference Held for "The Fault Is Not Yours" 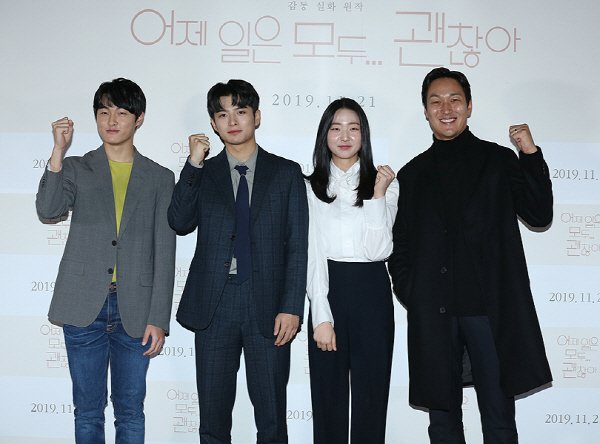 Director Lee Seong-han has been talking about his upcoming film "The Fault Is Not Yours", which deals with a past generation struggling to understand the tribulations of the current one. Casting was a particular favorite at the latest press conference, where director Lee Seong-han mentioned how Yoon Chan-young was the only actor he cast after the first audition.

An important aspect of the reasoning was tied up in the decision to give Yoon Chan-young a dual role. Lee Seong-han mentioned how metaphorically the story is about the teacher played by Kim Jae-chul, and how he tries to save Yoon Chan-young in a new form because he had already failed once in the past. Having Yoon Chan-young play both parts makes this particular point more obvious.

Son Sang-yeon, by contrast, was cast largely as a consequence of his competitive spirit. He survived three auditions and effectively impressed Lee Seong-han with how how we was not just an actor, but rather the character that Lee Seong-han was trying to cast. This was accomplished through just listening to what Son Sang-yeon had to say in terms of small talk and life experiences.

Kim Jin-young-I was also mentioned. The actress took her audition while she was still in her second year of middle school. He noted that, while her immaturity was the main factor in her getting the role, she has since advanced past that as an actress and as a young woman, that she doesn't really match the description anymore. "The Fault Is Not Yours" will release in South Korean theaters on November 21st.

"[HanCinema's News] Press Conference Held for "The Fault Is Not Yours""
by HanCinema is licensed under a Creative Commons Attribution-Share Alike 3.0 Unported License.