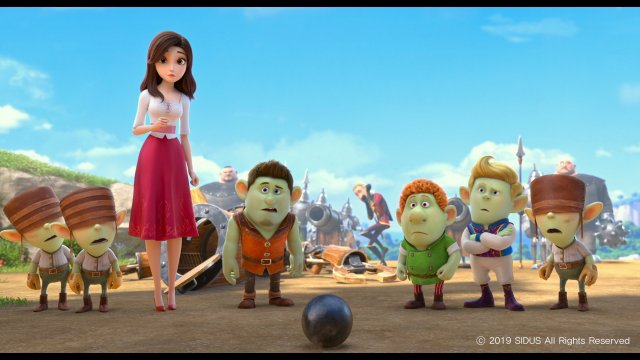 My official review for "Red Shoes and the Seven Dwarfs" will come out later this weekend. However, for those wondering how the final movie compares to the widely panned 2016 trailer, I can give details right now. Be warned that this article contains mild spoilers for the film.

In the original trailer two of the dwarves can be seen entering Red Shoes' room through a magic mirror and hiding as she enters. In the final movie the mirror is no longer used as a means of magical transport, and the character agency is reversed. Red Shoes is the one who finds the dwarves, rather than the other way around.

The character designs are another marked shift. In the original version the dwarves have a normal human colored skin tone. In the final version they are all colored green. This is because, as the opening scene quickly explains, the titular dwarfs were originally normal humans and their dwarf forms are actually cursed versions of their true selves. They are not originally bumbling characters, but dramatic fantasy heroes.

Red Shoes herself has also undergone a significant transformation. While the basic idea of her being a homely stout woman who becomes beautiful upon wearing the shoes is retained, she is no longer depicted in the act of undressing. In fact, it is physically impossible for anyone to watch her undress, as Red Shoes cannot remove her shoes in the presence of other people.

In the original trailer it was implied that the dwarfs wanted the red shoes for themselves for some unknown reason. However, in the final version the dwarfs are in fact unaware of the shoes' magical properties for most of the movie, though they express a strong interest in undoing their own curse.

According to writer/director Hong Sung-ho the script went through a large number of versions before the movie could finally go into production. With the release of the final movie it seems likely that previous marketing material was based on unused footage and earlier concepts of the project and that early trailers were not representative of the film's tone.