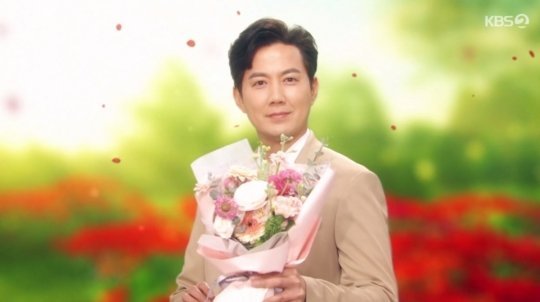 As it passes the halfway point in its eighty episode run, "Homemade Love Story" has emerged as a solid hit for weekend family dramas. It's forty-fourth episode on February 14th had ratings of 32.8%. And appropriately for Valentine's Day, this episode has marked an outpouring of interest for Ryu Jin. Though not a leading character in the drama, his character Jeong-hoo has long kindled interest in viewers for his gentle personality in contrast to his rough appearance.

Jeong-hoo is romantically connected to his wife Min-jae, played by Jin Kyung. Together the two of them are the parents of their divorced adult son Jae-hee, who is played by Lee Jang-woo, a proper lead character. A recent plot point involved Jeong-hoo taking his wife Min-jae out for a romantic dinner. He demonstrates exceptional etiquette for his wife, even pulling out her chair for her among other quirks meant to emphasize his steadfast love.

Elsewhere Jeong-hoo asks Min-jae out for walks, to differing results. In one incident he beams about her being a close friend, while elsewhere they end up playing together with a cat. The contrast is especially marked with their son Jang-woo, who was a less than chivalrous husband. The divorced man is starting to see the contrast between his own attitude toward love and that of his father. "Homemade Love Story" airs on Saturdays and Sundays at eight in the evening on KBS2.