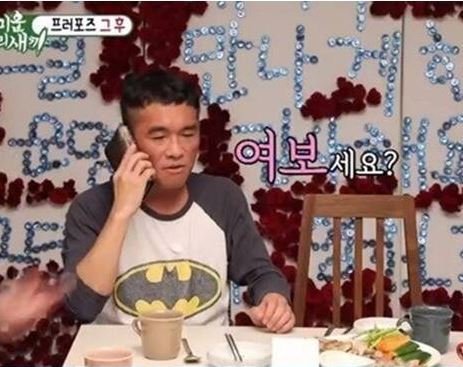 The situation regarding Kim Gun-mo's sexual assault allegation once again escalated over the weekend, as police have gotten involved and allegations that the victim is blackmailing the star have taken increased prominence. Against this backdrop, Kim Gun-mo did not appear on the variety show where he prominently appears, 'My Little Old Boy'. However, SBS has not given a clear reason as to why.

The obvious explanation is that Kim Gun-mo has been fired from the program pending his scandal. However, statements from SBS has stated that they have no plans to do extra filming to fill in the gaps such a removal would cause. According to SBS, Kim Gun-mo as well as his family had scaled down their involvement in the program starting in August - his mother being another frequent panelist on the program, which focuses on mothers talking about their adult entertainer children.

Though plausible, the lack of comment about this creative planning by SBS ahead of time has aroused suspicions that the network is doing damage control. They may be attempting to avoid apogizing, however indirectly, for allowing Kim Gun-mo to prominently appear on last week's program proposing to his girlfriend. For now, the allegations are in an ambiguous position, as the police investigation has only just begun following an eight hour interview with the victim on December 15th.

"[HanCinema's News] SBS Equivocates on Whether Kim Gun-mo Has Been Fired From Variety Show"
by HanCinema is licensed under a Creative Commons Attribution-Share Alike 3.0 Unported License.