[HanCinema's News] SBS Has a Strong 2020 Opening for Dramas 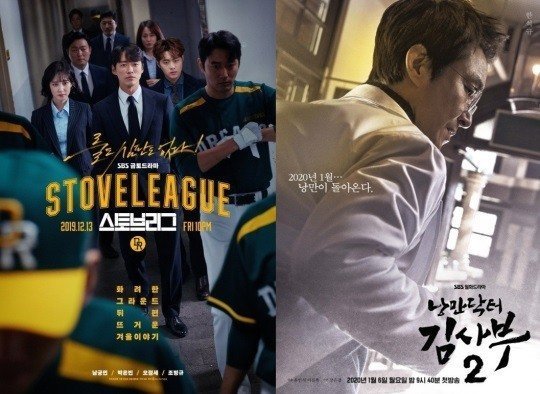 SBS, like most networks in 2019, went through a series of ups and downs. But so far in 2020 SBS has had almost entirely upshot in terms of its drama performances, as both of its late night dramas are enjoying ratings numbers upwards of 15%.

SBS's first big hit, "Stove League", actually started in December. The Namgoong Min led drama about a struggling baseball team had a passable opening episode of 5.5%, doubling that rating by the fourth episode. While the offbeat premise was a difficult sell, Namgoong Min has once again proven that he is a talent that can make or break a production. Or at least, that he has a keen enough eye to distinguish which projects have strong potential, as he did with "Doctor Prisoner" last year.

"Dr. Romantic 2" had a much more solid opening from the outset, with a 14.9% premiere, which showed that the love for "Dr. Romantic" had been, if anything, underestimated. In many ways "Dr. Romantic 2" repudiates the principles behind "Stove League". For its emphasis on new characters and storylines, "Dr. Romantic 2" is deliberately derivative of its predecessor. A potential season 3 is also likely being considered.

"[HanCinema's News] SBS Has a Strong 2020 Opening for Dramas"
by HanCinema is licensed under a Creative Commons Attribution-Share Alike 3.0 Unported License.