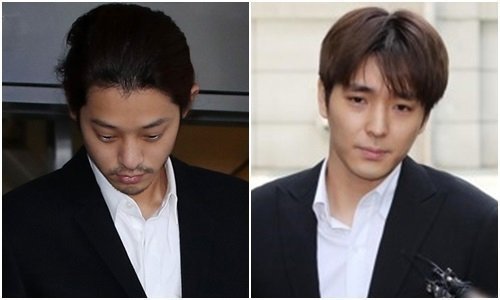 On May 7th the sentencing hearing for Jung Joon-young and Choi Jong-hoon was postponed until May 12th. Though the pair had been convicted relating to charges filed in November 2019, the sentence had been appealed. The presiding judge announced that the delay in sentencing had been requested due to an agreement between Jung Joon-young and the victim, which had been presented to the court in the form of a written statement.

In the judge's statement accepting the request it appeared fairly clear that the victim was asking for leniency to be provided to Jung Joon-young, as the judge made a big point of discussing the importance of taking the victim's opinion into account for such matters. However, he also added to this statement a strict reminder that the victim's opinion, while important, was not everything. The judge promised to reflect on the matter before issuing a final ruling.

Jung Joon-young and Choi Jong-hoon were implicated in a massive idol scandal last year regarding secret chat rooms where lewd photos of women were taken without permission. However, the case under appeal does not involve that scandal directly, but rather a pair of sexual assaults committed by Jung Joon-young and Choi Jong-hoon in 2016. They were given six and five year sentences for these cases in the earlier trials.