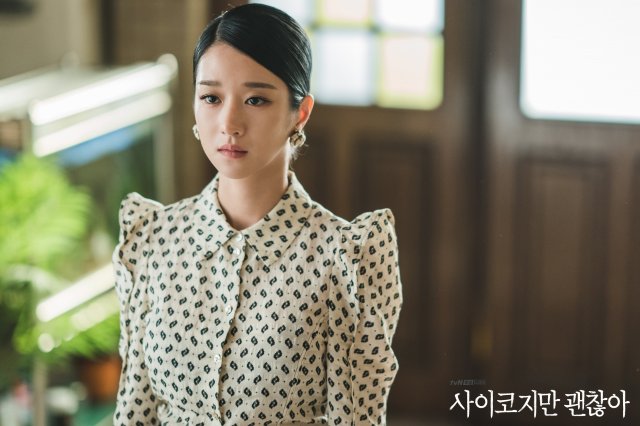 The heroines of South Korean dramas have taken on an increadingly active and dynnamic presence in recent years. They're e noticeable departure from their counterparts in older dramas, which were at times notorious for existing in obvious Cinderella stories. But Seo Ye-ji's rule in "It's Okay to Not Be Okay" has gone further than most with this, toeing the line between sympathetic and sinister as she drives most of the drama's greater conflict.

Seo Ye-ji's character, Moon-yeong, is a clinical psychopath. She is destructive for the fun of it and has a poor grasp of what empathy is and why it matters. While many drama heroines over the years have been criticized by fans for engaging in overly selfish behavior, with Moon-yeong, the selfish behavior is a deliberately designed character flaw. The male lead Kang-tae, played by Kim Soo-hyun expresses great discomfort with Moon-yeong for exactly this reason.

But the irony of Moon-yeong is that, for all her aggressive behavior, the woman dreams of living in a fairy tale world. Moon-yeong sees Kang-tae as her rescuer, though he regards her presence with hostility. Indeed, one explanation for the drama's relatively weak performance in the ratings is from viewers who simply do not like Seo Ye-ji's character. Whether her psychopathy is part of the story or not, the woman is by design off-putting.

This factor is only an especially big problem for those consuming the story in a traditional manner. Individual clips of "It's Okay to Not Be Okay" are popular on social media, where the limited context simply allows for spots where Seo Ye-ji causes trouble. Overseas viewers have also shown a keen interest in "It's Okay to Not Be Okay", spurred by how the drama isn't just different from South Korean standards but many worldwide ones as well.

"[HanCinema's News] Seo Ye-ji Plays a Different Kind of Strong Female Character in "It's Okay to Not Be Okay""
by HanCinema is licensed under a Creative Commons Attribution-Share Alike 3.0 Unported License.