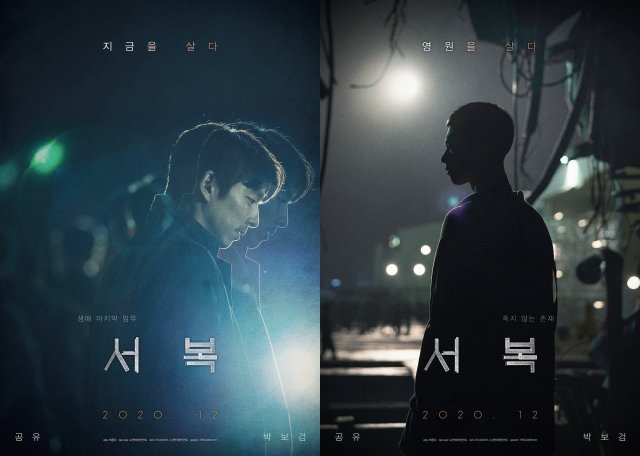 With "Space Sweepers" looking into a possible Netflix only release and "Emergency Declaration" being pushed back into next year, "SEOBOK" is likely to be the only major blockbuster theatrical release for the upcoming holiday season. Much of the premise of "SEOBOK" is experimental, with a science fiction concept that revolves around cloning. But in terms of marketing a clear trend has already emerged- emphasize the bromance.

And "SEOBOK" has quite the pair to pull it off with. Gong Yoo is a major star, but is best known for working alongside actresses. This in spite of the fact that his last major hit, "Goblin", was noteworthy for his strong chemistry with co-actor Lee Dong-wook. Park Bo-gum is a somewhat more recent force in that regard, due to his recent appearance in "Record of Youth" alongside the relatively unknown actor Byeon Woo-seok.

But the combination of an older actor with a newer actor in this kind of genre is more unusual. Additionally, it comes off the end of a relative break for Gong Yoo, who had no credited projects from 2017-2018, and the beginning of a similar one for Park Bo-gum who recently began his mandatory military service. "A Violent Prosecutor" was the last to try such an age gap in 2016 with Hwang Jung-min and Gang Dong-won, with an eleven year age gap compared to a fourteen year one for the "SEOBOK" stars.

Other bromance themed films focused more on personality clash. "Confidential Assignment" featured cops from different countries, and "Midnight Runners" had cops with different personalities. "Deliver Us From Evil" is an odd case of a movie that played up the bromance angle between its stars in marketing even though in the actual movie Hwang Jung-min and Lee Jung-jae rarely appear in the same scene, and are violently antagonistic when they do meet face to face.

Nevertheless, marketing has as much to do with success as content, and "Deliver Us From Evil" was a notable bright spot in the COVID-19 depressed South Korean film market. A fresh twist on a well trod concept with two actors who are popular for very different reasons may be the combination "SEOBOK" needs to succeed. "SEOBOK" currently has an expected release date of sometime in December.

"[HanCinema's News] "SEOBOK" Hopes to Be the Next Bromance Themed Box Office Hit"
by HanCinema is licensed under a Creative Commons Attribution-Share Alike 3.0 Unported License.