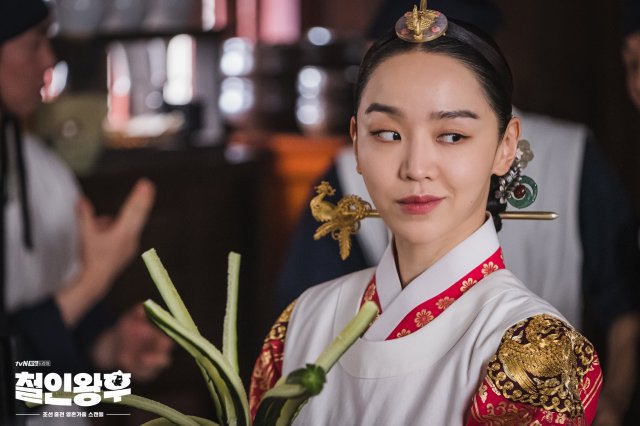 With ratings of 12.8% following its tenth episode on January 10th, "Mr. Queen" has proven the surprise hit of the new year. Shin Hye-sun has proven indispensable to the drama's success as the lead actress, despite the rather peculiar gender identity of her character. "Mr. Queen" is a fusion historical drama, and Shin Hye-sun plays a modern day womanizing chef trapped in the body of a Joseon-era consort.

Shin Hye-sun wasn't an obvious choice for the role- although really, no actress would be. But curious statements from the production company from when she was first offered the role shed some light on to why she was selected. Purportedly, Shin Hye-sun had to practice speaking the dialog in many locations before a final decision was made on her casting.

To the extent Shin Hye-sun can be said to have a specialty as an actress, that specialty would most likely be diction. Shin Hye-sun has a particular way of pronouncing words. This pronunciation is how she gets across the attitude of her characters. This quality of Shin Hye-sun's acting style led to her debut as a lead in "My Golden Life" following scattered smaller roles, and had its most obvious application in "Thirty But Seventeen" where voiced an emotionally seventeen year old woman in a thrity year old body.

The utility of this talent in the context of the mishmash between the identity of the lead character of "Mr. Queen" and his actual body is thus perfectly suited to Shin Hye-sun's talents. And indeed, that Shin Hye-sun is talented can't be denied. From a modest debut at age twenty-three as a lesser member of the "School 2013" ensemble, at thirty Shin Hye-sun is a widely known name, and likely to be a solid performer for many productions in the future as well.