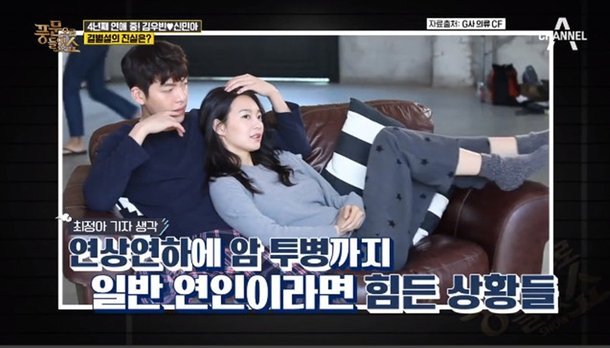 With Kim Woo-bin's appearance at the Blue Dragon Film Awards, and his statements suggesting a return is likely, attention once again turns to Shin Min-ah. The two actors have been in a relationship for four years. During two and a half of these years, Kim Woo-bin has been recuperating from the rare disease of nasopharyngeal carcinoma.

Back in September the Channel A celebrity news program 'Heard through the Grapevine' aired a segment about their story. Persons with closer knowledge of their relationship claim that Shin Min-ah moved closer to Kim Woo-bin so that she could see him more often, and that she was always there for him when he was having a difficult time. Though much of their relationship is not known by the public, they were spotted in Australia on an apparent date earlier this year.

Whatever the state of their relationship, Kim Woo-bin's comments at the Blue Dragon Film Awards suggest that the actor is ready for a comeback, thanking many unspecified people for their support in regards to his recovery. As all this is ongoing, Shin Min-ah continues to appear in the drama "Chief of Staff - Season 2".