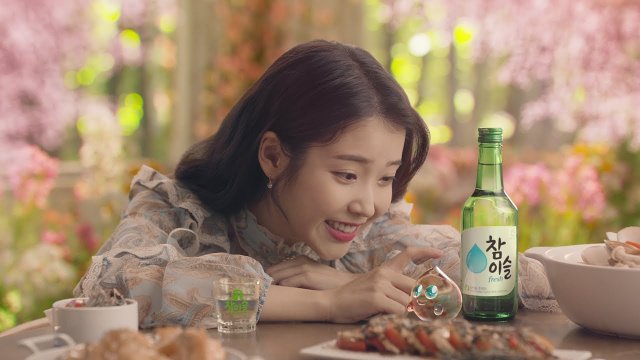 On March 16th the South Korean distillery HineJinro confirmed that they would be maintaining the current resdesign of their soju brand 참이슬, which is roughly translated into English as Real Dewdrop. The bright, clean blue color of the dewdrop on the current label is intended to coincide with the brand's ongoing marketing campaign. In this campaign, celebrity IU interacts with an anthropomorphic animated dewdrop intended to represent the brand's image.

The current marketing strategy for Real Dewdrop began in 2018, as HineJinro attempted to distinguish the brand for having a distinctly fresh and light feeling compared to other brands of soju. By comparison, the Jinro brand of Soju is represented by a toad character. While the toad character also represents cleanliness, it does so in a more exacting way, and is generally seen consuming the product rather than being the product itself.

Actress and singer IU has been under contract as the chief model for the Real Dewdrop brand since 2014 and is considered to be responsible for much of its image. Real Dewdrop tends to be more popular among younger consumers than other brands, particularly women. This is because the Real Dewdrop brand is at odds with soju's general image as a hard alcoholic beverage for more serious drinkers. IU is often depicted in Real Dewdrop ads as having drinks with similarly aged friends.