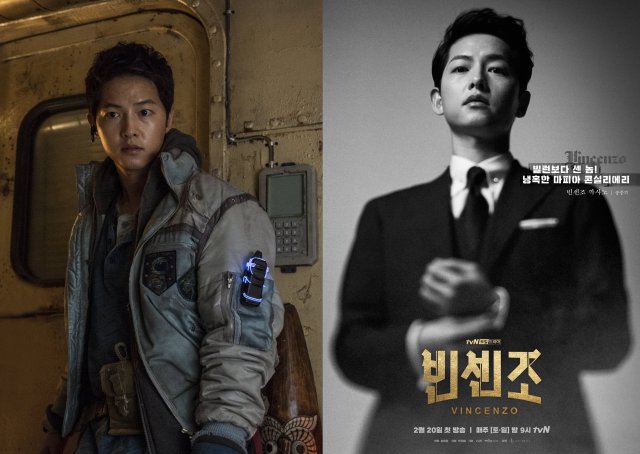 After having gone through all of 2020 without a single new project, fans of Song Joong-ki have been treated to two very different visions of the actor over the course of only a few weeks. In "Space Sweepers" Song Joong-ki played a largely archetypal leading role as the main perspective character with a tragic backstory in the space opera setting. But in "Vincenzo" Song Joong-ki plays an Italian mafia lawyer whose initially serious storyline quickly descends into farce when he arrives on Korean soil.

The contrasting visions are also noteworthy for being exposed to an international audience. Starting with "Arthdal Chronicles" in 2019 Song Joong-ki appears to have made a conscious decision to expand his brand worldwide, with "Vincenzo" now being his third project having been made easily available to international audiences. However, despite its overseas popularity, "Arthdal Chronicles" was well-liked more for its unusual prehistoric setting than for the work of any one actor.

Hence why "Space Sweepers" and "Vincenzo" have a much narrower focus. The more compact, four-person crew of "Space Sweepers" allowed Song Joong-ki more distinction compared to his co-stars, particularly as he had by far the most detailed backstory of the four. But with "Vincenzo" Song Joong-ki is the title character and center of all the action- what's more, the sheer quantity of spoken Italian required by the role gives Song Joong-ki a very cosmopolitan air.

Still, much as was the case with "Arthdal Chronicles", commentary on "Space Sweepers" and "Vincenzo" has largely centered on the projects as a whole rather than Song Joong-ki's own performance. Nevertheless, the actor has proved himself as a solid anchor around which a whole concept can be easily steadied. This may play to his benefit for future career moves, although for now fans both foreign and domestic are eagerly awaiting the next twists "Vincenzo" has in store.