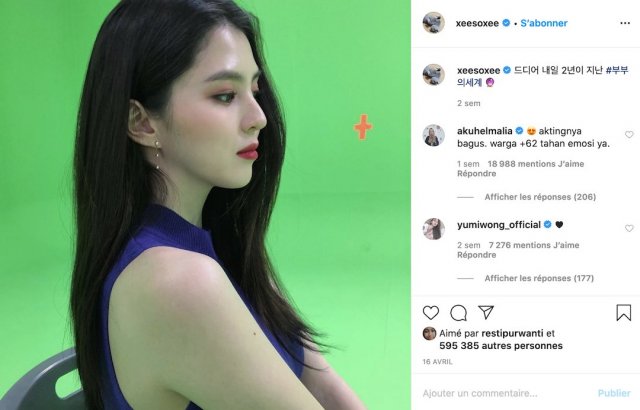 On May 1st Han So-hee opened her Instagram account to find it loaded with comments from Indonesia. This is thanks to strong distribution and popularity in regards to her currently airing drama, "The World of the Married", in that region. However, not all comments have been positive. Some commenters appear to be confusing Han So-hee with the character she plays in the drama, referring to her as a harlot who steals others' men.

The opinion is not uniform among Indonesians on Han So-hee's Instagram page. Indeed, Han So-hee herself can't understand many of the comments being made, as they are written in Indonesian. Some Indonesian who can write in English have taken it upon themselves to apologize for such negative commentary all the same.

South Korean dramas are not a new concept in Indonesia. Even earlier this very same year "Crash Landing on You" was a major hit in the region. However, they are still not quite mainstream, as was evidenced by an embarrassing incident last month when CNN Indonesia presented a picture of Hyun Bin in costume as a North Korean soldier as part of a computer graphic used for a story about North Korean leader Kim Jong-un.

There haven't been any comments either from the relevant actors or their agencies regarding these phenomena. Historically South Korean drama stars have always appreciated their international fans and agencies are less quickly to be angered by the actions of international fans compared to domestic rumormongers. Indeed, in this case Indonesian interest in "The World of the Married" is viewed with a sense of flattery, as the drama was not produced with high expectations for the international market.