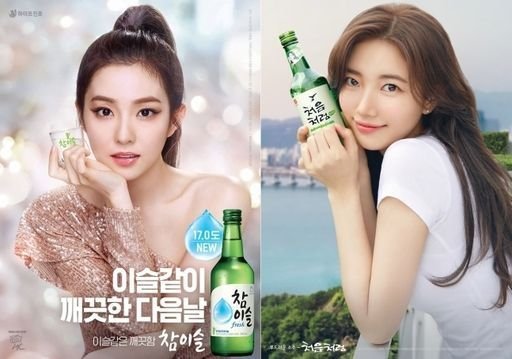 In an official statement on November 4th the South Korean Ministry of Health and Welfare stated that it is considering a ban on allowing celebrities to promote soju. The news follows criticism from ruling party lawmakers that moves against the liquor industry have been overly lax.

While pretty celebrities have long adorned soju bottles, cigarette cartons for some time now have been required to show the generally hideous effect of cigarette inflicted disease.

The move most notably affects Irene and Bae Suzy, who have done work for competing soju brands as models. This signaling of a possible new temperance movement may in fact primarily be a warning to such celebrities to avoid seeking out new contracts. South Korea has a high rate of alcohol consumption compared to similar countries worldwide.

However, even new government dictates won't change how critical soju brand promotion has been since the late nineties. Irene is only the latest model for her brand, following Lee Young-ae, Hwang Soo-jung, Kim Tae-hee, Sung Yu-ri, Ha Ji-won, Lee Min-jung, and Lee Ji-eun in that role. The brand Bae Suzy has modeled for has also employed Ku Hye-sun, Lee Hyori, UEE, Go Joon-hee, and Shin Min-a in that position.