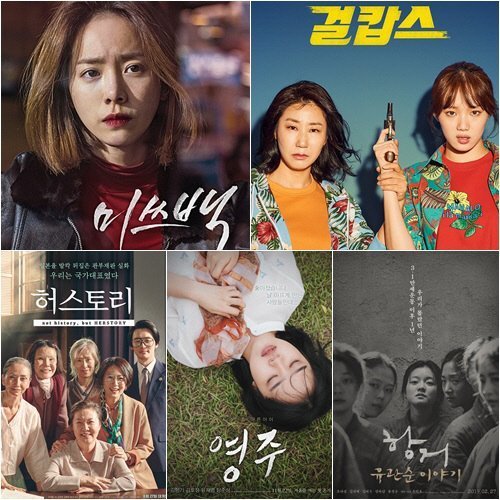 A recent spate of South Korean films headlined by women has inspired a spiritual support movement in South Korea. The tagline is, it might be difficult to watch this movie, but I still support it. And this sentiment is expressed by buying tickets for movies which the buyer may not actually be able to see.

The spiritual support movement is a new form of feminism. Explicitly capitalistic in nature, the movement hopes to move film production away from male centered stories by sending a message that women-centered films can also make a decent profit.

The starting point for the movement was "Herstory" last June. The film was a courtroom drama that dealt with an effort in the nineties by comfort women to sue the Japanese government in the hopes of obtaining an apology. While the film was well-reviewed and gained a strong fandom, those fans fretted about the film's mediocre box office performance and how that might disincentivize similar projects in the future.

With the release of "Miss Baek" in October, a film which had a woman director in addition to a female protagonist and feminine themes, the idea of supporting a movie that a person can't watch gained some momentum. "Young-ju", a contemporary story about an orphan and "A Resistance", a historical dramatization of the prison time served by resistance hero Yu Gwan-sun, both also received promotion this way for having female protagonists.

However, the actual usefulness of this exercise is dubious. Technically it's a way of spoofing box office numbers, rendering them less useful as indicators. Spiritual support also offers an obvious means of arguing that a project is without merit and only being promoted for political reasons. And on the most mundane level, the spiritual support movement can make it difficult for people who can actually watch a movie from getting a good seat.

Such criticisms have intensified with the use of "Miss and Mrs. Cops" as the latest exemplar of the movement. Unlike the other four films mentioned, "Miss and Mrs. Cops" has not been praised for having a serious women-centered story. It is, at best, a buddy cop action comedy where the main characters happen to be women. Even the filmmakers have tried to distance the movie from gender politics, even though the movie's own title directly references gender.

It is also unclear whether the spiritual support movement actually meaningfully affects numbers in any way. This is especially true as most smaller films make their money back from secondary markets, not the box office. This is true for all movies, not just women-centered ones, although there have been notably more women-centered movies in recent years as a result of this phenomenon.