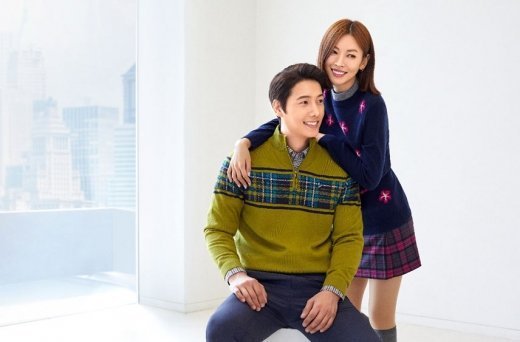 The sports casual brand All For You has started advertising for its fall and winter collections, and has taken the somewhat novel approach of using actors Kim So-yeon and Lee Sang-woo as models. The two are also married in real life.

The theme of the pictures falls under the tagline of #LoveLogging. The Ashley and Starfield lines are intended to convey a sense of comfort, warmth, and lovingness that can best be showed by the couple's actual intimate gestures.

Kim So-yeon is currently appearing as the lead in the KBS 2TV weekend drama "Mother of Mine" in the eight 'o clock timeslot. Lee Sang-woo, meanwhile, is the lead in the MBC drama "Golden Garden", which airs in the nine o'clock weekend timeslot.

"[HanCinema's News] Spousal Actors Kim So-yeon and Lee Sang-woo Appear in All for You Fall and Winterwear Spreads"
by HanCinema is licensed under a Creative Commons Attribution-Share Alike 3.0 Unported License.