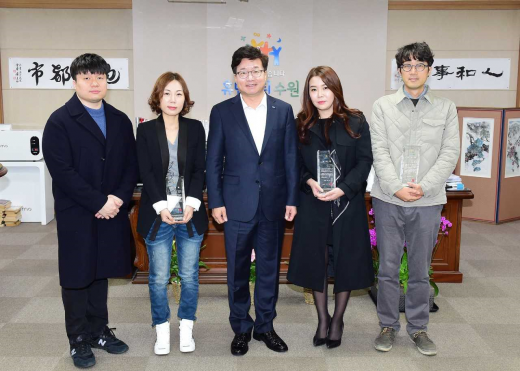 Yeom Tae-young, the mayor of Suwon, recently presented a congratulatory plaque to representatives of About Film. The production company behind "Extreme Job" sent four representative to the meeting, including two of the movie's writers. The meeting took place on March 11th.

The reason for the ceremony has been the recent boost in tourism to Suwon prompted in part by a plot point in the recordesetting film. The hapless police team needs special sauce to make sticky chicken, and is forced to use a recipe for Suwon style beef ribs. This is because it's the only kind of sauce that the team's lone competent cook, a native son of a Suwon beef rib restaurant, knows how to make.

The effect on Suwon's tourism has been especially pronounced noticable around Suwon Chicken Street. This traditional food street is locating close to Hwasung Palace.

The original scenario, written by Moon Choong-il (not present at the meeting) did not feature Suwon beef ribs. Writers Heo Da-joong (second from left) and Bae Se-yeong (fourth from left) came up with that aspect of the story while adapting the scenario into a working script.

Mayor Yeom Tae-young offered much praise for the good "Extreme Job" has done for Suwon. He encouraged all film professionals present to consider Suwon in their future endeavors as well.