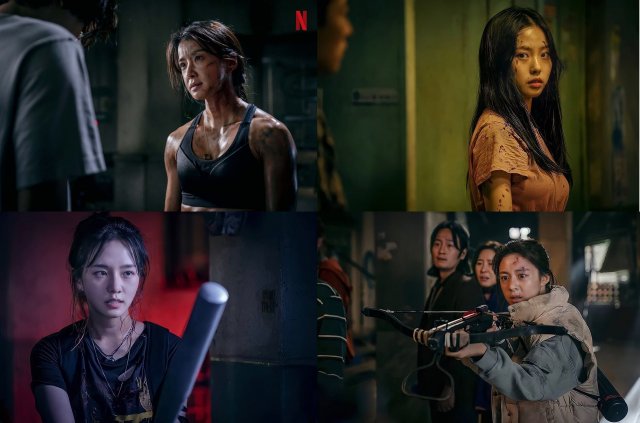 A major aspect of "Sweet Home" that has drawn interest from viewers both domestic and abroad is the Netflix drama's depiction of female characters. While the explicit headliners of the drama have been male, most obviously lead actor Song Kang, in practice "Sweet Home" is an ensemble movie. And women make up a critical part of this ensemble, as is to be expected because the modern world thrust into disaster aspect of the premise makes it clear the dramatis personae were basically selected at random.

While director Lee Eung-bok has also been noted for having directed strong female characters in such dramas as "Descendants of the Sun", "Goblin", and "Mr. Sunshine", the persons in "Sweet Home" are noteworthy for being more proactive. Lee Si-young, for example, is a former member of special forces. Consequently she's one of the few characters with a good idea of how to react in physically dangerous situations. This expertise is well taken into account by other people in the story.

Go Min-si plays more of a typical woman, yet is also shown as being naturally introverted and cold, and showing marked character growth over the course of the drama. Park Gyu-young, by contrast, is aggressive, caring, and charismatic, taking on the role of a protective older sister figure. Go Yoon-jung, as a doctor, comes the closest to playing a traditional female support character. But even she shows surprising energy, as well as a curious and very relevant interest in archery.

Any one of these characters on their own would be a strong asset to any drama. But all four in combination have a very grounded cooperative effect. Praise also likely needs to be granted to the screenwriting team behind "Sweet Home" where two of the three credited writers, Hong So-ri and Park So-jung-I, are women with no previous writing credits. Such elements have allowed for "Sweet Home" to provide refreshing characterization in a monster hunting genre not generally well-known for it.