[HanCinema's News] "The Battle: Roar to Victory" and "My Name Is KIM Bok-dong" Set to Benefit From Anti-Japan Boycott 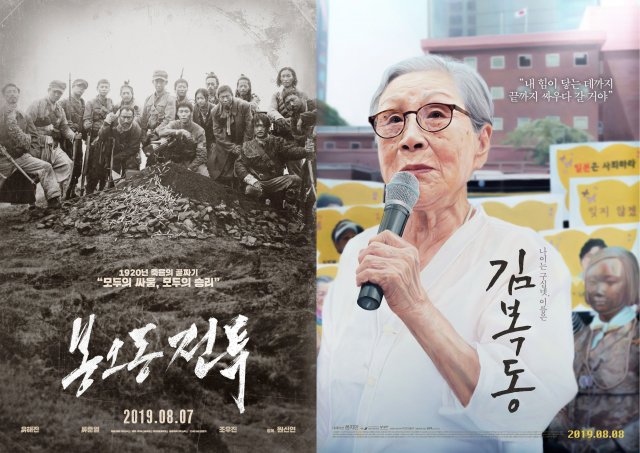 While "The Battle: Roar to Victory" and "My name is KIM Bok-dong" have been in production for quite some time, the very different films, one a major blockbuster and the second a documentary, are being released in a highly charged cultural moment. In a time where buying Japanese products and going on Japanese vacations is frowned upon, both movies stoke that sentiment.

The connection is not coincidental, as both films deal with historical crimes committed by the Japanese Empire. The anti-Japan boycott is a response to punitive measures taken against South Korea by Shinzo Abe in response to a South Korea court case which ruled that Japanese corporations that committed crimes during the Occupation period could be sued in South Korean courts and have their property in South Korea be seized to make restitution in the form of damages.

"The Battle: Roar to Victory" depicts the Battle of Fengwudong, wherein a Korean independence militia engaged and defeated a Japanese battalion in Manchuria. While embellishments are expected, the movie's profile has increased tremendously compared to its other major competition, because of its contemporary relevance. Japanese conservatives maintain that the occupation of Korea was benevolent, and the Battle of Fenguwong is an obvious case where then contemporary Koreans disagreed.

"My name is KIM Bok-dong" has been building up support more organically thanks to a social media campaign designed to help crowdfund the documentary's release. Many celebrities participated in this campaign. The extent to which this may help the movie at the box office is ambiguous. The Japanese comfort woman documentary "Shusenjo: The Main Battleground of the Comfort Women Issue" only performed modestly, though it has enjoyed high approval ratings from online user ratings.

"[HanCinema's News] "The Battle: Roar to Victory" and "My Name Is KIM Bok-dong" Set to Benefit From Anti-Japan Boycott"
by HanCinema is licensed under a Creative Commons Attribution-Share Alike 3.0 Unported License.