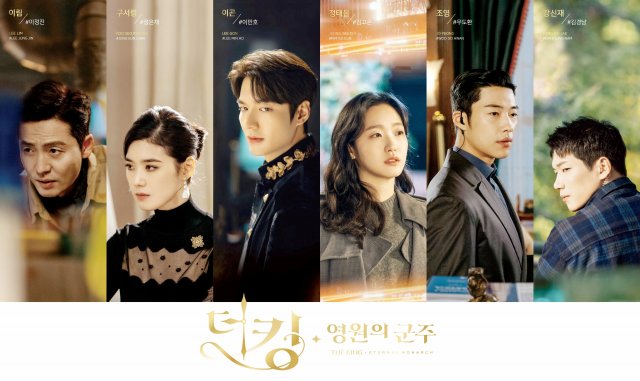 "The King: Eternal Monarch" had all the makings of a major hit. The parallel worlds themed fantasy drama is the combeack feature of major star Lee Min-ho, and penned by perennial hitmaker Kim Eun-sook. And yet the drama has floundered with a weak 11.4% opening episode that dipped down to 9.7% in its fourth outing last weekend.

These ratings are not terrible, but they are quite a bit lower than the drama's expectations and budget. They've also called attention to an aspect of the South Korean drama industry that has lately gone unnoticed- the decline of fantasy dramas. The last genuinely big fantasy drama hit was "Goblin" in 2016.

While many fantasy dramas that have aired since then have had aesthetic issues that can be used to explain away their poor performance, "The King: Eternal Monarch" shares too much in common with "Goblin" for that explanation to be intuitive here. In addition to screenwriter Kim Eun-sook the drama also features Kim Go-eun again in the leading role. But her romantic lead is now someone her own age, eliminating what many saw as one of the creepier shortfalls of "Goblin".

But then that's another part of the problem. Kim Eun-sook's scripts have long been dogged by strange creative decisions and "The King: Eternal Monarch" has proven no exception. Many viewers have taken issue with the inconsistent intuitive intelligence shown by the main character played by Lee Min-ho. Other aspects of the worldbuilding have also raised questions, particularly the unapologetic extent to which characters from the fantasy universe play on uncomfortable gender tropes.

The often direct contrast between two different worlds has made these worldbuilding issues more obvious than they were in past Kim Eun-sook works. The lack of coherent direction has also dampened enthusiasm for the drama. Lee Min-ho's star power alone may give "The King: Eternal Monarch" a better run on the international market, but for now interest is lukewarm.