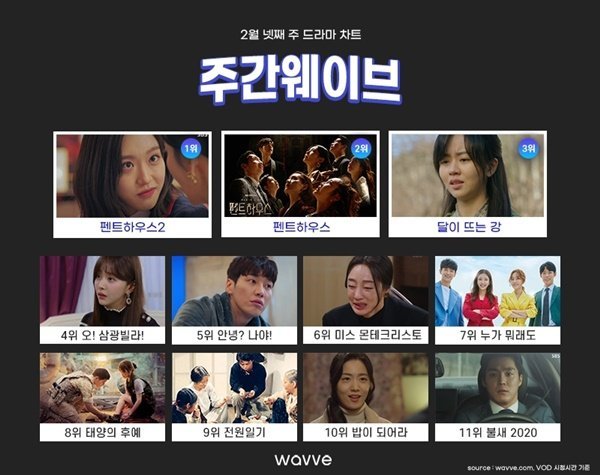 On March 3rd the streaming platform wavve released their streaming data for the fourth week of February. "The Penthouse 2" continues to lead the rankings, following a similar performance the previous week. Likewise, "The Penthouse" is right behind it with "River Where the Moon Rises" also reprising its role in third place as the other high profile drama available on the OTT platform.

The strong start for "The Penthouse 2" is already begging the question of whether it can outperform the record of thirteen straight weeks at number one set by "The Penthouse" shortly before its ascension. The long-running weekend drama "Homemade Love Story" was in fourth place with "Hello, Me!" in fifth place. The daily soap opera "Miss Monte-Cristo" was in sixth place- a noteworthy jump from its premiere week, where "Miss Monte-Cristo" was in eleventh place.