[HanCinema's News] "The Penthouse" and "Mr. Queen" Have High Ratings and High Controversy 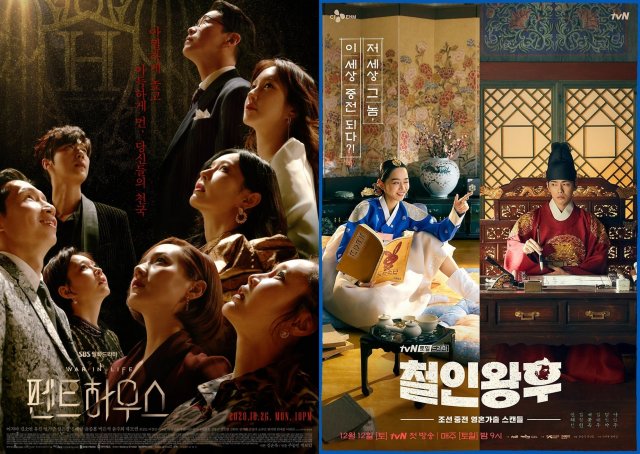 On December 15th "The Penthouse" recorded its best ever ratings of 23.3% for its fifteenth episode. From the very beginning "The Penthouse" has pushed boundaries in terms of shocking content. While this has encouraged viewers, it has also encouraged quite a bit of criticism. One recent episode featured a student being threatened and bound by rope- by another student no less.

The extremity hasn't just promoted moral criticism but also aesthetic criticism, as some have wondered to what extent the often outrageous plot points in "The Penthouse" are designed to disguise substandard acting. While hailed as a prestige-styled version of soap opera, "The Penthouse" has come to typify how prestige television is often more a matter of using cinematographic shooting style rather than a meaningful distinction of content. Previous dramas from screenwriter Kim Soon-ok were similarly provocative.

Meanwhile, "Mr. Queen" has faced criticism of a very different sort. The fusion historical time slip drama deals with a womanizing modern day chef trapped in the past day body of King Cheonjo's queen consort. One controversy has involved with this man's inappropriate internal dialog. He frequently expresses much ignorance and disrespect of Joseon culture, although the overall impression given is that this character is a boor. Nevertheless, hundreds have complained to broadcasters of cultural disrespect.

Elsewhere, "Mr. Queen" has faced awkwardness due to being based on a Chinese novel. The issue is less with the source material itself as it is comments recently unearthed from the author of that novel which were derogatory toward persons of Korean descent. The production company behind "Mr. Queen" apologized for this, stating that they were unaware of these comments during production. Nevertheless, they defended their work, claiming they were doing their best and not adapting prejudicial elements.

"[HanCinema's News] "The Penthouse" and "Mr. Queen" Have High Ratings and High Controversy"
by HanCinema is licensed under a Creative Commons Attribution-Share Alike 3.0 Unported License.