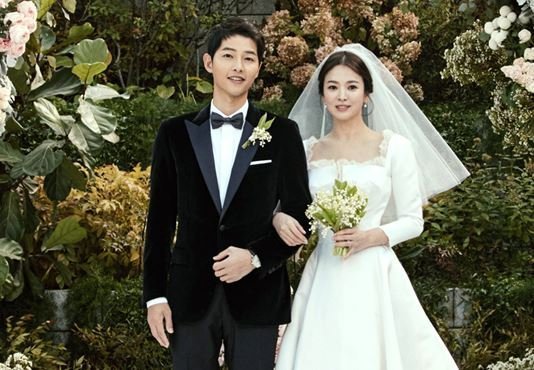 While accepting the best KBS acting award in 2016 Song Joong-ki described Song Hye-kyo as his most beautiful and lovely partner deserving of all honors. Song Hye-kyo responded in kind during her acceptance speech. There was more to their kind words then than just professional respect.

The two started seeing each other after filming for "Descendants of the Sun" ended over their shared love of crude soju. Their wedding announcement was on July 5th of 2017, and put an end to speculation that the two were romantically involved. Having kept their relationship a secret, the two were soon much more outspoken in public. While promoting "The Battleship Island" Song Joong-ki mentioned learning a lot from Song Hye-kyo's accidental method and said that made her all the more lovable.

Consequently the marriage of the Song-Song couple was a major event. Many celebrities were invited to the November ceremony at the Silla hotel. Choi Ji-woo, Yoo Ah-in, and Kim Hee-sun were among the domestic Korean celebrity guests. Chinese celebrities were also in attendance.

But following the wedding information about the two became more scarce. Though Song Joong-ki and Song Hye-kyo remained a powerful presence in the South Korean entertainment industry with many fans, their married life contained increasingly few cute vignettes of their life together. Though popular on social media the two seldom referenced each other. So it is that in retrospect, their split should not have been a big surprise.

"[HanCinema's News] The Sad Ending to the Song Joong-ki and Song Hye-kyo Love Story"
by HanCinema is licensed under a Creative Commons Attribution-Share Alike 3.0 Unported License.