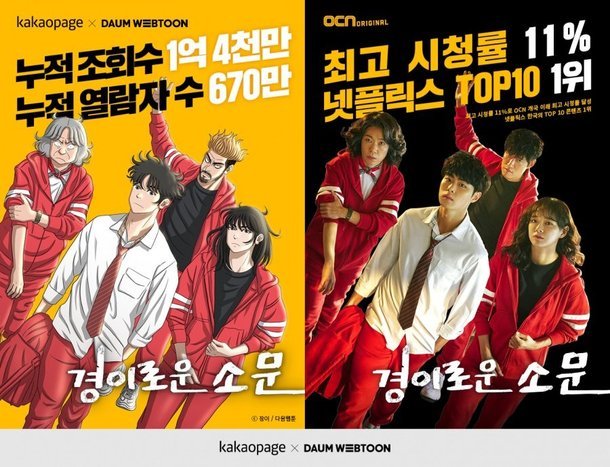 Following the announcement that "The Uncanny Counter" webtoon had acquired over 140 million views between its official Daum and Kakao accounts, the author of that webtoon confirmed that a third season was under consideration. "The Uncanny Counter" webtoon is currently in its second season. Fans had been curious whether the story would continue after that point, and the author was inspired by this positive reaction to consider continuing the story.

It was unclear whether a third season of "The Uncanny Counter" was a prospect previously being considered by the author, or if this reaction was inspired by the unsuspected success of the drama adaptation, as a third season would mean more original material that could possibly be adapted. "The Uncanny Counter" drama ended with ratings of 11% and is currently the most popular drama on Netflix in South Korea.

"The Uncanny Counter" webtoon is currently available in South Korea and Indonesia. It is planned to be released in the North American region via Tapas sometime in February. The story of both the webtoon and the drama deals with various employees at a noodle restaurant who also hunt down malicious spirits.

"[HanCinema's News] "The Uncanny Counter" Webtoon Being Considered for Third Season"
by HanCinema is licensed under a Creative Commons Attribution-Share Alike 3.0 Unported License.