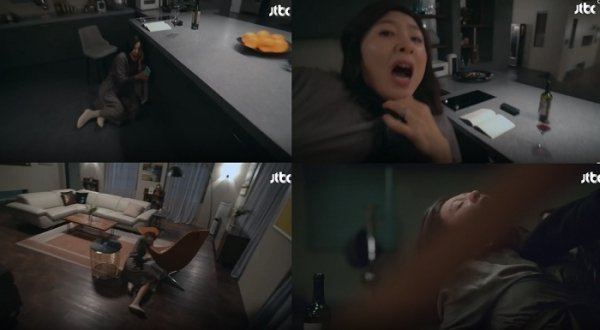 With its tremendous ratings victory over the weekend, securing over 20% for the first time, "The World of the Married" also endured its fair share of criticsm due to its depiction of violence. The criticism centers around a scene in the eighth episode where the lead character played by Kim Hee-ae is attacked by an unknown masked figure and choked.

The criticism mainly centered around the voyeuristic way the scene was shot. Much of it is from the perspective of the attacker, partially to avoid revealing his identity. But one possibly unintended effect of the scene is that it gives the atmosphere of a first person shooter video game, appearing both savage yet also fun in a dark, grisly manner.

Online commenters were disturbed both by the nastiness of the scene, but also the discordance with the drama's overall rating. According to South Korean television guidelines "The World of the Married" is supposed to suitable for ages 14 and up, but this particular scene seemed like something more appropriate for an 18 and up production. Many commenters also expressed concern about the unwarranted violence sending assault survivors into traumatic shock due to its unexpected nature.

"[HanCinema's News] "The World of the Married" Criticized for Overly Graphic Depiction of Violence"
by HanCinema is licensed under a Creative Commons Attribution-Share Alike 3.0 Unported License.