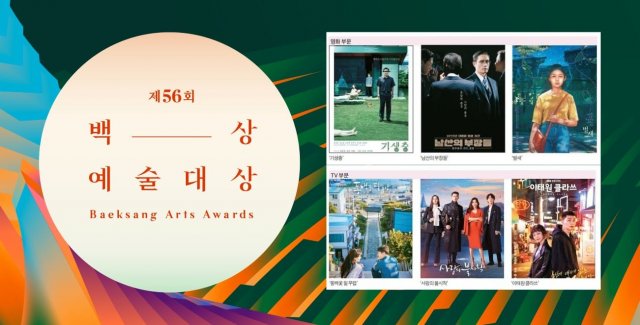 This year's Baeksang Arts Awards have attracted strong attention for an unusually large number of strong contenders both in the film and the drama categories. Much of the interest, particularly compared to the awards season last year, has been prompted by COVID-19 and the interest being stuck inside has attracted in terms of media products. However, with the South Korean box office finally set to see new major releases in June, the Baeksang Arts Awards have also emerged as critical for building hype.

"Parasite" is the obvious favorite to win best film, holding an exceptional twelve nominations. This is following an international run where the offbeat class conscious movie eventually won top honors even in Hollywood. It could, theoretically, sweep the entire ceremony save for Best New Director, for which it could not be nominated. However, it stills faces competition from "The Man Standing Next" and "House of Hummingbird", both of which would face far greater prospects of success in any other year.

"The Man Standing Next" was the last major box office success in South Korea before COVID-19, starring Lee Byung-hyun in the leading role as a realistically imagined spy. Because it came out during Lunar New Years, this is its first appearance on the award circuit. "House of Hummingbird" did compete in previous ceremonies, though, and did quite well for itself. The coming-of-age story centers around a teenage girl circa 1994 Seoul. Both have six nominations overall.

The aggressive boom/bust cycle of dramas has made the best drama category more difficult to forecast. "When the Camellia Blooms", "Crash Landing on You", and "Itaewon Class" all came one after another in short order, redefining the drama conversation in completely different ways in completely different genres. Ironically "The World of the Married", the most recent drama in this iteration, did not receive a nomination in that category.

This is most likely because the nominators sought to honor more distinctly Korean fare, with "The World of the Married" technically being a remake. "When the Camellia Blooms" takes place in a small town, "Crash Landing on You" takes place in North Korea, and "Itaewon Class" takes place in the hippest district of Seoul. So all three hits define Korean culture in their own way, although with nine, eight, and seven nominations between them respectively, no single one is an obvious favorite.

The fan vote can be accessed here and will continue until June 2nd, Korean time.