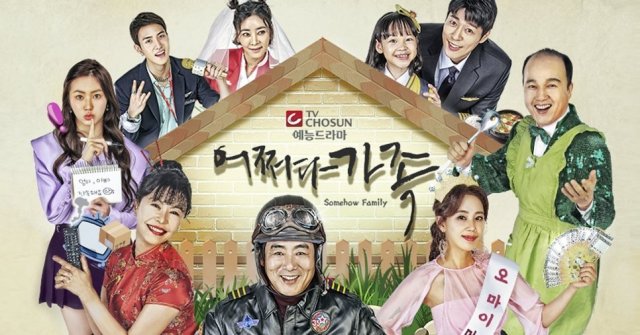 Following a string of successes with offbeat, throwback programming centered around trot music, TV Chosun looks to make another unexpected trend with "Somehow Family". The upcoming drama is being marketed as a classically styled situation comedy. Director Kim Chang-dong of the original "High Kick!" marks his first drama in fourteen years with "Somehow Family".

He will have Sung Dong-il of the Answer Me dramas as leading man, playing the elder patriarch of the titular family. Much like the Answer me dramas, Sung Dong-il will be playing a character with the same name that he does. Jin Hee-kyung will play his wife at their eccentric boarding house. Other notable cast members include Andreas Varsakopoulos, a Greek-American TV personality with unusually high billing for a foreigner.

The production values are a noteworthy increase over TV Chosun's last situation comedy, "Shut Up and Smash" from 2017. That drama was also a daily production. By having it appear on Sunday nights in the eight 'o clock timeslot, TV Chosun appears to be betting that their scripted situation comedy can start a trend. It has little comparable competition in that timeslot genrewise.

Screwball situation comedies of this style have been unknown in South Korea for the past eight years due to changing trends. The final iteration of "High Kick", "High Kick 3, The Short Legs Counterattack" was the last drama to be produced in such a style. Director Kim Chang-dong has said that "Somehow Family" will be aiming toward a broad audience both young and old. He also emphasized the sheer variety of entertainers, many of who are highly recognizable, though not necessarily famous.