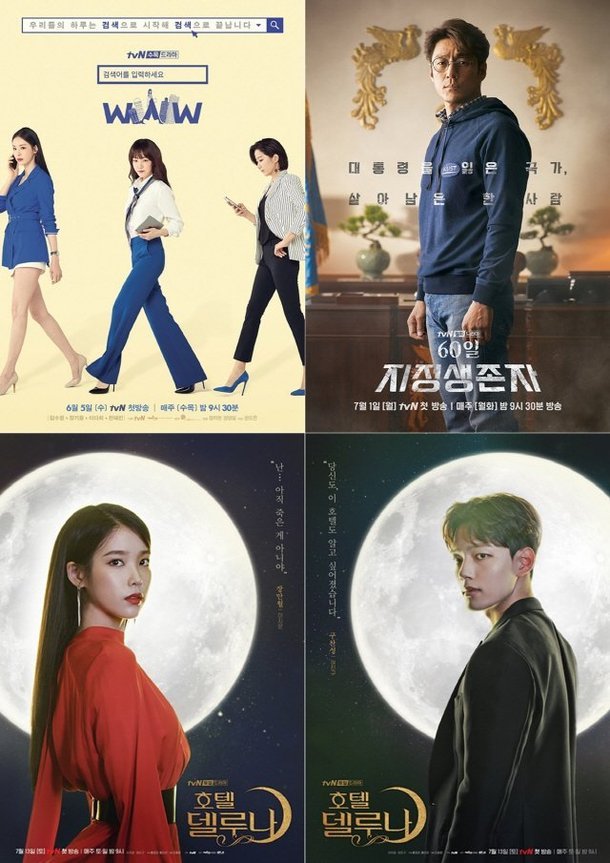 With two new dramas in July of very different tone, tvN continues to reenforce its reputation as a leading creative drama network. While "Hotel Del Luna" as a high concept fantasy romance is well in line with the network's brand, it will be joining the workplace minded "Search: WWW" and the political thriller "Designated Survivor: 60 Days" in a fairly broad genre slate.

"Search: WWW" is entering into its second half this month. The episodic drama centered around an Internet search engine's female-centered office has been doing fairly modestly in the ratings. In practice, "Search: WWW" does have quite a few typical romantic comedy elements, but the marketing and concept for the drama have eschewed that element to instead focus on generally self-contained weekly stories in the Wednesday/Thursday timeslot.

"Designated Survivor: 60 Days" is based on the American drama of the same title and shares its premise of an unlikely minor political official taking hold of the country after the rest of the chain of command is unexpectedly killed. Styled as a political thriller, the drama is the biggest deviation from tvN's normal brand. It just started airing on July 1st in the Monday/Tuesday timeslot.

Lastly, the biggest July release for tvN is "Hotel Del Luna", which stars IU as an enigmatic hotel manager who has to work with the hotel's new owner, played by Yeo Jin-goo. "Hotel Del Luna" is sandwiched between parts two and three of the historical drama "Arthdal Chronicles". The radically different tone between those two dramas could easily impact one or both of them negatively, though expectations remain high for "Hotel Del Luna".