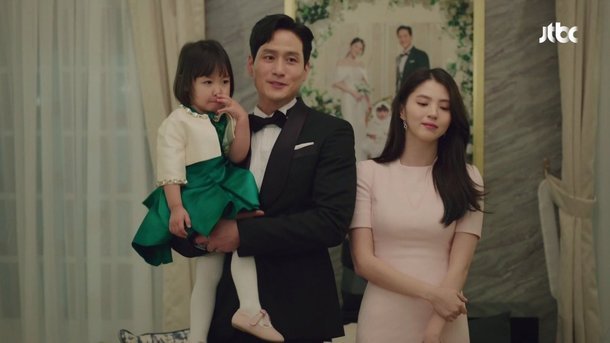 In the seventh episode of "The World of the Married" a timeskip takes place of two years, during which time the characters played by Park Hae-joon and Han So-hee go to the city of Gosan and return from it, bringing their daughter with them. As expected, the daughter, which was just a baby at the time, has grown up some. But many viewers believe that Jenny has grown far too much, to the point of damaging the willing suspension of disbelief.

The criticism is not surprising. Jenny appears nearly half as tall as her father in the accompanying shot, though she is allegedly only two years old. Some have said that the actress appears four years old. Others suspect she may be as old as six, contrasting Seo Joo-win-I of "Hi Bye, Mama!", a child of comparable size to the one who plays Jenny, but one who is textually far older than Jenny is.

It is not known how old the actress playing Jenny is, or her real name, or even if she can really be considered an actress. Jenny is ultimately important not as a character, but rather as a symbol of the illicit love affair between her parents. "The World of the Married" airs on Friday and Saturday nights on jTBC and recently cleared 20% in terrestrial ratings for the first time.

"[HanCinema's News] Viewers Perplexed by Time Dilation in "The World of the Married""
by HanCinema is licensed under a Creative Commons Attribution-Share Alike 3.0 Unported License.