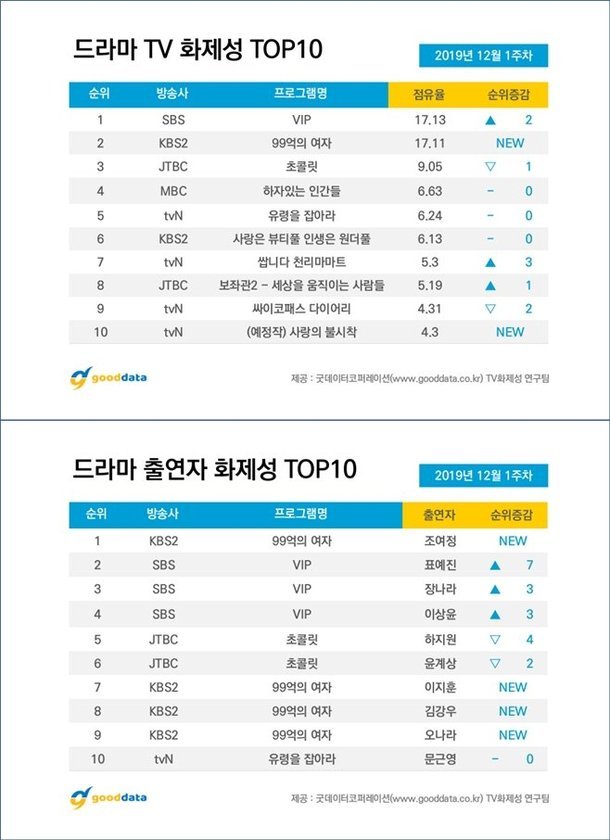 The latest Good Data Report has been released for the first week of December. Data collected by the Good Data Corporation from December 2nd to December 8th analyzed which dramas were receiving the most engagement on social media. "VIP" maintained the top position, narrowly beating out the newcomer "Woman of 9.9 Billion" by only .02 percentage points - 17.13 against 17.11.

"Woman of 9.9 Billion" had more success in the metrics judging performers. Cho Yeo-jeong held the top spot, and three of her co-stars appeared in ranks seven, eight, and nine, in the drama's opening week. Those performers were Lee Ji-hoon-I, Kim Kang-woo, and Oh Na-ra, respectively. Kim Kang-woo is the drama's credited male lead, with Lee Ji-hoon-I and Oh Na-ra being listed as supporting cast.

Pyo Hye-jin of "VIP" was another supporting cast member to gain unusual attention this week, thanks to her character taking on a sudden importance in the story. She ranked number two for performers, with lead actors Jang Nara and Lee Sang-yoon ranking third and fourth. "Chocolate" has seen a drop in interest since its premiere, though it still outperforms most other dramas, holding third place for dramas and fifth and sixth places in performers for its lead actors Ha Ji-won and Yoon Kye-sang.

One surprise appearance on the list was "Crash Landing on You" in the tenth rank for dramas, even though the drama won't be released until December 14th. This suggests that the major romantic project starring Son Ye-jin and Hyun Bin will start airing with a massive tailwind - though how long that persists will depend on the viewers' response to the completed project as it starts airing.