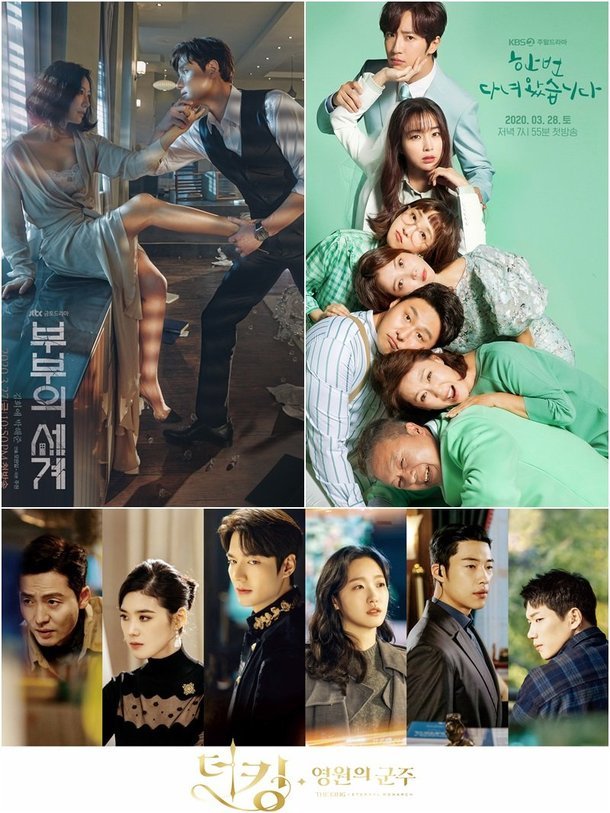 While last weekend proved successful ratings-wise for many dramas, at the same time major dramas were also wrapped up in unfortunate gender-related controversies. Many remain the subject of bitter resentment among fans for apparently promoting unhealthy and even borderline illegal attitudes when it comes to women.

"The King: Eternal Monarch" may have suffered the worst of it. Featured among its supporting cast is a female prime minister played by Jung Eun-chae. But rather than seeming stateswomanslike her opening dialog instead discusses the impact of a wireless bra in showing off a woman's breasts. Attempts to rationalize this peculiar introduction in terms of the drama's worldbuilding have not stemmed criticism, with disgust from women in particular being quite pronounced.

The nominally family-oriented drama "Once Again" also featured controversy of a different sort when its characters come up with a plan to save their faltering seaweed roll restaurant. The humorous setpiece involves the characters entertaining men through the kinds of party tricks one might expect at an alcoholic bar. Students wearing school uniforms are even involved in this. Many viewers have complained of the scene stating that it crossed the line in terms of romanticizing such alcoholic activity.

And lastly, there has been the recent escalation in violent conflict in "The World of the Married", culminating in a scene where Kim Hee-ae is dramatically choked. Compared to the other two events described criticism of this one has dropped somewhat, as the escalation at least fits the drama's overall tone, albeit not the rating. Differently motivated as all three scenes were their coinciding on the same weekend may just be coincidence. But many viewers remain critical about the poor standards being set.