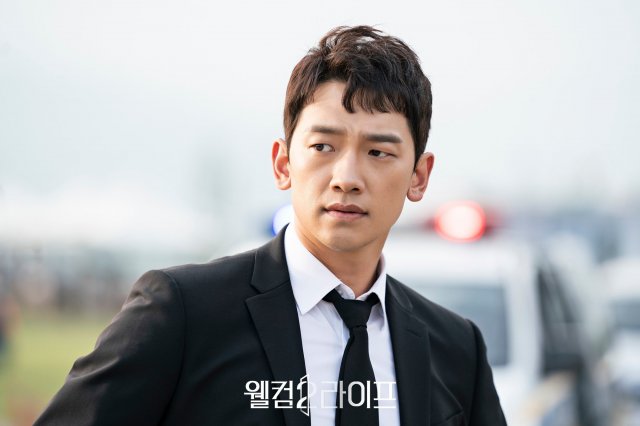 Rain made his first big appearance as an actor in the 2004 drama "Full House". At the time this was seen as mainly being a tie-in for his musical career. But in recent years Rain has been more aggressive in pursuing acting projects. First with "Please Come Back, Mister", then "Sketch - Drama", and now "Welcome 2 Life", which just had its first episode premiere on August 5th.

Rain's determination to succeed in this field is somewhat surprising, given the lukewarm responses to his acting ability as of late. The film "Race to Freedom: Um Bok Dong" was a particularly sore spot for the famed singer. The Occupation era epic about a Korean bicycle athlete severely underperformed at the South Korean box office. Rain's inadequacies as an actor were frequently cited for the movie's bad performance.

But he's in more familiar territory with "Welcome 2 Life", a fantasy story about an ace lawyer who has to rebuild his life from a parallel world. It's hard not to see the parallels with Rain's own career. He, like his character, has been stuck in a bit of a slump and has to struggle to escape.

Time will tell if "Welcome 2 Life" will be the acting comeback Rain has been hoping for - a throwback to the praise of his career as a younger man. So far, the drama's ratings, while not exceptional, are at least competitive with other dramas in the same time slot.