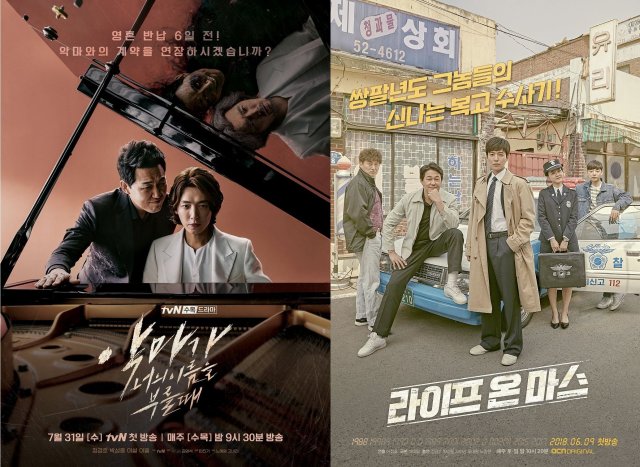 When "Life on Mars" was broadcast on OCN last year expectations were low. The drama was coming off of "Mistress", a drama which did quite poorly in ratings. Though based on a British drama, the time traveling conceit of "Life on Mars" inevitably resulted in its being compared to "Signal". Nonetheless, "Life on Mars" was a hit in its own right thanks in large part to the strong chemistry and performances of Jung Kyung-ho and Park Sung-woong.

The epilogue to "Life on Mars" suggested that a second season was in the works. With both Jung Kyung-ho and Park Sung-woong having freed up schedules such an announcement seemed inevitable. Instead, tvN announced that the two actors were returning for "When the Devil Calls Your Name" - a drama with an even stranger premise than "Life on Mars", featuring Park Sung-woong as a satanic figure coming to collect on Jung Kyung-ho's soul.

The two make for a peculiar pair. Both are long term veterans of the South Korean entertainment industry with some distinctive roles, but neither one is much of a headliner. Jung Kyung-ho was the lead of "One More Happy Ending" and "Missing 9", but while those dramas had their fans, it wasn't much to capitalize on. After "Life on Mars" his next role, in "Mama Fairy and the Woodcutter", was a supporting one, suggesting surprisingly little draw to his name.

Park Sung-woong, by contrast, has long made a career for himself by playing villainous, sinister characters. "The New World" was his main standout role, although similar ones are sprinkled about throughout the years. Though very recognizable Park Sung-woong relies on other actors to react to - his responses are what make him a household name.

Though their talents diverge quite a bit, ultimately it's these differences that makes Jung Kyung-ho and Park Sung-woong so compelling together. They highlight each other's distinctions in a way neither can do alone. So even though "When the Devil Calls Your Name" is a risky endeavor compared to the expected second season of "Life on Mars" the production decision may well seem a savvy one. After all, did viewers really want more "Life on Mars", or just the chemistry of its leading men?

"[HanCinema's News] "When the Devil Calls Your Name" Reunites "Life on Mars" Cast"
by HanCinema is licensed under a Creative Commons Attribution-Share Alike 3.0 Unported License.