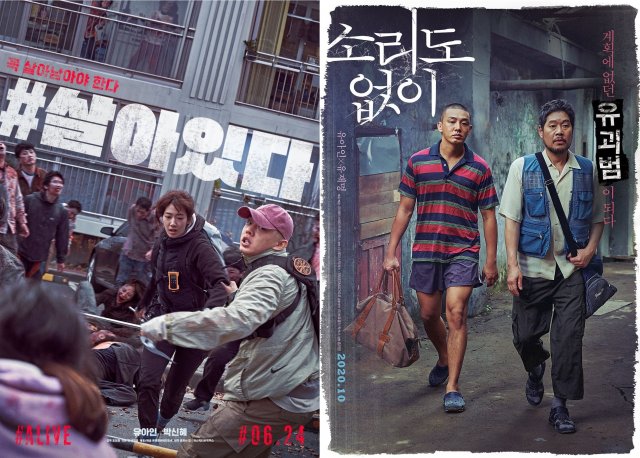 "Voice of Silence" has been confirmed for an October release date. This news suggests a confidence in the South Korean film industry in its ability to rebound from the current increased COVID-19 restrictions. Perhaps not coincidentally, "Voice of Silence" is headlined by Yoo Ah-in, an actor whose most recent film, "#ALIVE", has garned attention not just for breaking a previous COVID-19 induced slump but also having a strong performance on OTT services.

"Voice of Silence" is a crime drama where Yoo Ah-in and Yoo Jae-myung play two men who are caught up in an unexpected kidnapping plot. Exact details about the plot are scarce but the particular timing of the release suggests that the producers may be trying to take advantage of Yoo Ah-in's improved profile from the OTT success of "#ALIVE". While lacking the high concept premise of the zombie movie, "Voice of Silence" does have the benefit of Yoo Ah-in in an unusual role.

Indeed, "Voice of Silence" is a bit below Yoo Ah-in's typical profile. The movie is the first from writer/director Hong Eui-jung, and features an unusual starring role from Yoo Jae-myung, who typically does supporting roles. Even in the era of COVID-19 "Voice of Silence" has been a low profile production, with even most of the character name's as yet unknown. So the movie can use any help it gets when it comes to marketing.

"[HanCinema's News] Yoo Ah-in to Return in October With "Voice of Silence""
by HanCinema is licensed under a Creative Commons Attribution-Share Alike 3.0 Unported License.