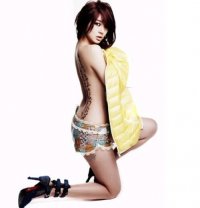 Yoon Eun-hye has fallen in a happy dilemma, for she is becoming popular after the success of "Coffee Prince".

She is not doing a drama or movie right now but is so busy with commercials that she hasn't found time to recharge as an actress. It seems she's resting after her drama but truthfully, she is spending at least twenty days in a month for promotions. For this month, she has filming for Basic House and JoinUs, and a commercial for v=b in April.

She is a model for many clothing brands, and although she received proposals for alcohol, tire, candy, and fast food commercials, she refused because it did not fit with either her image or her busy schedule.

"Coffee Prince" has gained much popularity in Japan and China, and there are requests for her to visit or have promotions there. But she is so busy in Korea that it is impossible to have three free days. The media press of Japan, who has become tired of waiting, requested press coverage of Yoon Eun-hye in Korea, and are planning to go in April.

It has been a while since she became the first choice for dramas and movies.

Because of this, there are rumors that the pay must be 50,000 dollars per drama episode, and it is leaving her company speechless.

From a new star to a giant star, Yoon Eun-hye is experiencing growing pains.

"Hard times for Yoon Eun-hye? Growing pains of becoming a big star"
by HanCinema is licensed under a Creative Commons Attribution-Share Alike 3.0 Unported License.
Based on a work from this source