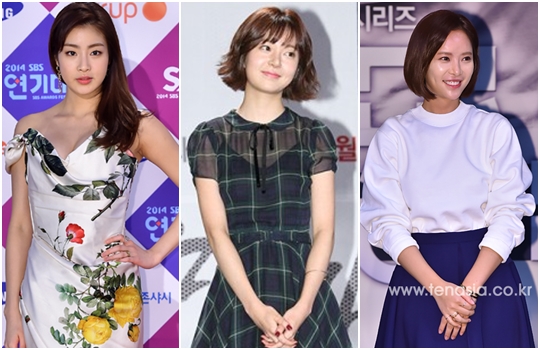 There are actresses who beat the cold weather and never stop working hard to deliver great performances with their endless passion this winter.

These actresses include Hwang Jung-eum, the leading actress for MBC's new drama, 'Kill Me, Heal Me', Baek Jin-hee for MBC's ongoing drama, "Pride and Prejudice", and Kang So-ra from the tvN's popular drama, "Incomplete Life" that has recently completed.

The rating for the first episode of 'Kill Me, Heal Me' was 9.2% (Nielsen Korea) ranked second amongst the dramas broadcast at the same air time. The brilliant casting of Hwang Jung-eum, Ji Sung and Park Seo-joon has already predicted great performance and kicked off to a nice start. Ji Sung and Hwang Jung-eum met again since their co-appearance in KBS2 "Secrets" 2013 and have shown their unquestionable great chemistry garnering much attention from viewers. She has been showing great performances through SBS "Giant" (2010), MBC ' Can You Hear my Heart' (2011), SBS Plus ' Full House 2′ (2012), MBC 'Golden Time' (2012), SBS Incarnation of Money' (2013), KBS2 "Secrets" (2013), SBS "Endless Love" (2014), without break since she debuted through MBC sitcom 'High Kick Through The Roof ' (2009).

She has established her solid position as an actress who is trusted for flawless performance to bring each character of her roles to life while she has been continously appearing on small screens.

She played an unpredictable yet cheerful college student in a sitcom, presented a subtle performance in a historical drama, and touched viewers' heart by her heartfelt acting as a mother who lost a child. She is ready to show another transformation as Oh Ri-jin in 'Kill Me, Heal Me', the first year resident doctor in mental health who owns humble personality contrasted to her youthful appearance.

Baek Jin-hee as well has been maintaining her upward popularity through the energetic performances since she debuted through a sitcom. She shared common interest and laughs with viewers through her role, a young job seeker in MBC sitcom 'High Kick 3, The Short Legs Counterattack' (2011).

Later, she showed impressive acting through the strong and confident character of the wealth family's daughter-in-law full of secrets in MBC's top ranked weekend drama, Gold, Appear!' She again made a strong presence as the femme fatale character, Tanasili in MBC "Empress ki". She continued her acting in 'Triangle - Drama' and "Pride and Prejudice" as well as appeared in SBS documentary show, 'The Law of the City in New York'

Through the MBC's ongoing drama, "Pride and Prejudice", she has constructed the character of Han Yeol-moo in details, who is confident yet suffers from deep scars in her heart from time to time. As a strong prosecutor and as a romantic female lead in the drama, she has been in the right track showing the excellent performance.

Kang So-ra who played the rookie employee, Ahn Yeong-i in "Incomplete Life", which garnered major attention from the public last year. She will come back soon. After the completion of the popular drama, she has been busy with TV commercials and pictorial shooting. However she is decided to choose her next work soon and continue her acting career without much break.

Kang So-ra played the irreplaceable character, Ahn Yeong-i in "Incomplete Life", who was one of the few female employees of the company, One International in the drama. She brought the various aspects of the character to life successfully taking the viewers on a successful journey through the spectrum of emotions related to her difficult family history and a female employee suffering from sexism at work.

Thanks to the actresses who have lasting passion towards acting yet are not afraid of challenges and transformation, the small screens will be full of excitement.

"Hardworking actresses, Kang So-ra, Baek Jin-hee and Hwang Jung-eum"
by HanCinema is licensed under a Creative Commons Attribution-Share Alike 3.0 Unported License.
Based on a work from this source