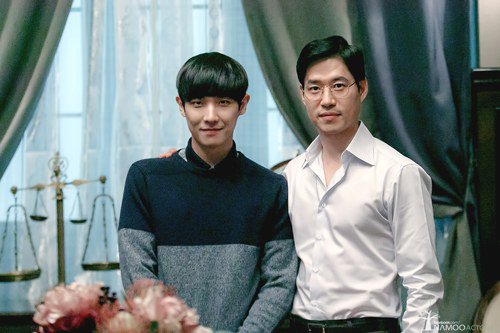 Namu Actors provided a picture of Yu Jun-sang and Lee Joon looking tender together as father and son in the new SBS drama "Heard It Through the Grapevine".

"Heard It Through the Grapevine" is a black comedy drama pinpointing the materialistic sense of the top-notch high class people who have imperial power and authority though satire. Yu Jun-sang and Lee Joon star in it as elite father and son.

Yu Jun-sang takes on the role of Han Jeong-ho, the representative of a law firm which runs in the family and was educated with only the best. Han Jeong-ho is a powerful figure who has a hand in with even the most important personnel in the government body using resources he's attained through legal counseling as his weapon.

Lee Joon stars as Han In-sang, a brilliant mind who was created from an incubator and grew up knowing his parents' words to be the law. He's in 12th grade and has never once complained about anything to his perfect father and graceful mother.

A source from the drama said, "You can look forward to their teamwork. They were already absorbed into their character from the beginning. Yu Jun-sang made Lee Joon comfortable as a senior even during break times and Lee Joon was always polite to his fellow cast".

"Heard It Through the Grapevine" is the newest drama by Ahn Pan-seok and will be broadcasted on the 23rd at 10PM.

""Heard It Through the Grapevine" Yu Jun-sang and Lee Joon as father and son"
by HanCinema is licensed under a Creative Commons Attribution-Share Alike 3.0 Unported License.
Based on a work from this source